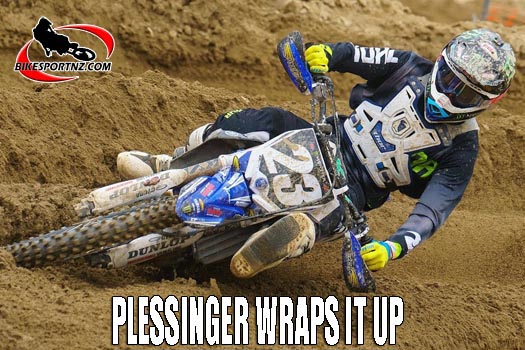 The United States Motocross Championships marked the 11th round of 12 at Budd’s Creek in Southern Maryland at the weekend with Yamaha’s Aaron Plessinger wrapping up the 250cc crown.

Plessinger entered this penultimate round of the season with an opportunity to clinch his first career title, and he successfully hoisted the Gary Jones Cup for the 250 class following an opening moto victory and third place overall effort.

In the battle for 450cc class honours, Kawasaki’s Eli Tomac emerged victorious in the 450 class to take his eighth overall victory of the season and extended his lead in the championship standings.

Meanwhile, New Zealand’s Cody Cooper (Honda) finished 18th and 15th in the two 450cc races and that was good enough for 18th overall on the day. He has now slipped back from 10th to 11th in the series standings.

The 250 class saw Honda’s RJ Hampshire capture his first career victory thanks to an impressive win in the second moto.

The first 450 Class moto got underway with Frenchman Marvin Musquin grabbing the holeshot over Honda’s Ken Roczen and Yamaha’s Justin Barcia. Roczen quickly moved by Musquin and into the lead to start the race, while Tomac was mired in the field and made several passes to circulate the opening lap in seventh.

Roczen was able to take advantage of a clear track and set the pace early, allowing the German to open a small cushion over Frenchman, who gave chase in second. The gap between Roczen and Musquin stayed at around two seconds for the majority of the moto. With five minutes remaining in the race, Musquin closed in on the rear wheel of Roczen and began searching for a way around. On lap 12, Tomac entered the battle for a podium position and blasted his way around Barcia for third.

As the race entered its final laps, Roczen managed to up the pace and stretched his lead back out on Musquin, whose charge to the front came to a halt. Roczen remained unchallenged as he crossed the finish for his second moto win of the season with 13.8 seconds to spare on Musquin. A hard-fought effort from Tomac put him third.

The final 450 class moto saw Phil Nicoletti grab the holeshot, but he was overtaken by Musquin, Barcia, and Roczen on the opening lap. Tomac once again found himself behind his championship rivals and passed his way into sixth by the start of the first lap.

Musquin wasted no time attacking the challenging hilly circuit and quickly opened a lead of a couple seconds on Roczen in an early battle for the overall win. The cushion between the frontrunners was short lived as Roczen began to find his stride near the halfway point of the moto and passed Musquin for the lead on lap five. After a slow start in which he sat fifth for half of the moto Tomac was able to get around both Blake Baggett and Barcia, who tipped over and allowed Tomac to move into third. The defending champion then set his sights on Musquin and soon took over second.

With Roczen pushing a blistering pace, holding a lead of more than five seconds, Tomac’s put in a relentless effort to reach the Honda rider’s rear fender in the waning stages of the moto. On Lap 12, Tomac muscled his way around Roczen to take the lead, while Baggett was able to make the move on Musquin for third. At this point Roczen was still in possession of the overall, but Baggett’s late charge carried him around Roczen for second with three laps to go and shifted the overall into Tomac’s favour.

As the chequered flag waved, Tomac brought home his 15th moto victory by 5.4 seconds over Baggett. Roczen held on for third.

With their identical scores Tomac (3-1) and Roczen (1-3) finished in a tiebreaker, but the better second moto gave Tomac the advantage for his 17th career victory. Musquin completed the overall podium in third (2-4).

“It was a different Budds Creek track today,” said Tomac. “The track was kind of a combo of hard pack and soft dirt, but overall it was decent and made for some good racing lines. I was eating a lot of roost early on in Moto 2, but held my composure and waited for the right time to attack. It was nice to rebound in the second moto and get the job done. I’m feeling good heading into the final round at Ironman next week.”

Tomac holds a 20-point advantage over Musquin in the 450 Class standings with one round remaining. Roczen’s efforts on the day helped him surpass Barcia for third in the standings. Roczen is 70 points behind Musquin.

The opening 250 Class moto saw Plessinger capture the holeshot ahead of RJ Hampshire and Mitchell Harrison. With a star-studded field behind him, Plessinger immediately sprinted in an attempt to distance himself from the competition, while Austin Forkner jumped his way past Harrison into third.

As Plessinger pushed the pace out front, Hampshire kept the red plate holder within sight for the first half of the 30-minute-plus-two-lap moto. Despite hot temperatures and high humidity that proved to be a challenge for the riders, Plessinger consistently laid down fast lap times and began to extend his lead as the moto entered its final stages.

Plessinger went on to take his ninth moto win of the season by 6.7 seconds over Hampshire, who matched a season best runner-up result. Forkner finished strong to complete the podium in third. The moto win effectively locked up the championship for Plessinger, giving him a stress-free shot at victory in the final moto.

The deciding 250 class moto saw Plessinger launch out of the gate to sweep the holeshots, this time over fellow Moto 1 podium finishers Hampshire and Forkner. Much like the first moto, Plessinger looked to set the pace early as he attempted to break away from Hampshire, while Forkner found himself under pressure from Honda’s Chase Sexton.

With Hampshire giving chase to Plessinger at the head of the 40-rider field, Sexton and Forkner continued to engage in the battle for third, passing each other several times. The upper hand went to Sexton as he successfully took third. The Honda riders kept pressing their way towards the front as Hampshire overtook Plessinger for the race lead on lap five, with Sexton making the pass for second just one lap later.

As Hampshire consistently hit his marks while managing the lead, Sexton kept his teammate on his toes and refused to let him pull away. On lap seven, Plessinger lost the front end coming down a hill, which allowed Forkner to inherit third and dropped Plessinger all the way to 10th. The battle for third was intense as Harrison started creeping up on Forkner, applying heavy pressure as the duo traded positions several times down the final stretch of the moto. On lap 14, Harrison made an aggressive move on the inside of Forkner to gain the position.

Hampshire held on to take the first moto win of his career by 3.7 seconds over Sexton, giving Honda a sweep of the top two positions. Yamaha’s Justin Cooper parlayed a late charge into a pass on the final lap to steal third from Harrison.

The 2-1 moto scores by Hampshire were good enough to give him his first career overall victory, edging out Sexton in second (7-2). With the championship in hand, Plessinger took the final step of the overall podium in third (1-11). Hampshire is the 84th different winner in 250 class history, and the third first-time winner this season.

“Today felt great and it was a big boost for the team with Chase [Sexton] and I finishing first and second,” said Hampshire. “It seemed like whenever I have been able to get a good moto result, the other moto something freak has happened, whether my fault or not. The team has been busting their butt this season to keep making the bike better and I think that shows with the results. It’s such a relief to finally get the job done.”

Plessinger’s third overall capped off the clinching of his first career championship with one round remaining on the calendar. Alex Martin sits 84 points behind in second, while Yamaha’s Justin Cooper trails him by an additional 48 points.

“I was starting to get jitters on the sight lap for Moto 1 today,” said Plessinger. “I tried my best to not think about the championship and just focus on the race, but it’s tough because the thought is definitely there. I had so much excitement and emotions after the first moto that it was just really hard to focus for the second race. It’s been such an incredible year and I don’t think its really sunk in yet.”

The 2018 Lucas Oil Pro Motocross Championship will continue next weekend for its final round of the season on Saturday, August 25, with its annual visit to Ironman Raceway in Indiana.