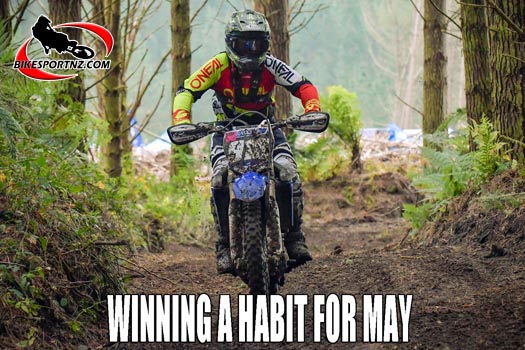 It seems that winning is becoming a bit of a habit for Auckland’s Callan May.

But the Yamaha ace figures it’s a good habit to have and certainly something he’s keen to keep going as he currently tops two major cross-country competitions.

Fresh from winning the opening round of the Yamaha NZXC cross-country series near Tokoroa a week ago, the 26-year-old electrician from Titirangi was again the man to beat at the weekend, this time winning the second round of three in the separate Motomuck Two-man Series in the Woodhill Forest on Sunday.

May had taken his Yamaha YZ250FX to also win the first round of the Motomuck Two-Man Series at Muriwau last month and so his convincing win in Sunday’s gruelling race at round two at Woodhill obviously places him solidly on top of the series standings, with just the final round still to come, back at Muriwai on September 2.

And there will be no rest for May either, with a big trip now planned to the Manawatu this coming weekend, where he will tackle the second round of six in the Yamaha NZXC Series at the sandy Taikorea Motorcycle Park near Himatangi on Sunday.

“This season seems to be working out well for me,” said May.

“It was tough at Woodhill on Sunday because I rode solo for three hours against a bunch of two-man teams and that was always going to be hard work. I wasn’t the only rider to go solo, though, and the runner-up on Sunday was fellow Yamaha rider Luke Mobberley (from Muriwai), who also rode alone. I think we both did pretty well actually.”

“I was on the third row for the start on Sunday and decided to just settle in behind the leaders and bide my time. Sure enough, a few of them made mistakes and crashed, allowing me to jump into the lead on lap two (of what would eventually turn into a seven-lap race).

“I had Luke Mobberley stick with me for a while, but I managed to shake him near the end and enjoyed a comfortable win,” he said, May eventually crossing the finish line more than a minute ahead of Mobberley (Yamaha YZ250).

Meanwhile, the top finishers in the two-hour junior race at Woodhill were Muriwai’s JayRoy Skinner (KTM 125SX), who finished the race just a fraction ahead of Warkworth’s Finn Tomlinson (Husqvarna TE300), with Morrinsville’s Liam Calley (Kawasaki KX250F) claiming third overall on the day.

“I’m really looking forward to Taikorea and round two of the NZXC Series this coming weekend,” May said.

After Sunday’s racing at Taikorea, the Yamaha NZXC Series continues at Muriwai on September 2; hits Matata on October 13; then heads to the Woodhill Forest, on November 10, before it finally wraps up at Waimiha, in the King Country, on December 8.