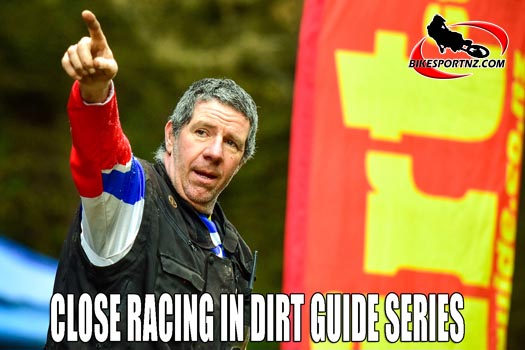 The opening round of the popular Dirt Guide Cross-country Series near Tokoroa a week ago was a roaring success.

In the juniors it was a great battle for the win between Daniel Refoy and Will Yeoman, which went down to the wire with Yeoman taking the win, but only just.

Going into the last lap, Refoy had the lead but took a fall in a rut letting Yeoman through for the win. Nearly 60 juniors and minis lined up for the start and the racing was awesome with everyone having a great time.

More than 100 riders lined up for the senior race and, just as race organiser Sean Clarke had predicted during riders’ briefing, someone was going to win that had not really won a big race before and he was right, with Rotorua’s Ethan Harris, riding his father’s KTM 300, taking the win by nearly two minutes.

Cambridge’s Ashton Grey put up a good fight, coming from a bad start to take second overall and Blake Wilkins got a lucky third, passing Richard Sutton within sight of the finish line, so he had to settle for fourth overall.

The ride of the day would have to go to Te Awamutu’s Rachel Archer, who failed completely at starting the 250 four stroke she was riding to finally begin the race 20 odd seconds behind the entire field.

Archer rode the wheels off the Husky for finish eighth overall, right behind her dad, Kevin.

The second of three rounds of the Dirt Guide Series is set for the same venue at Ohakui, south of Tokoroa, on June 24.