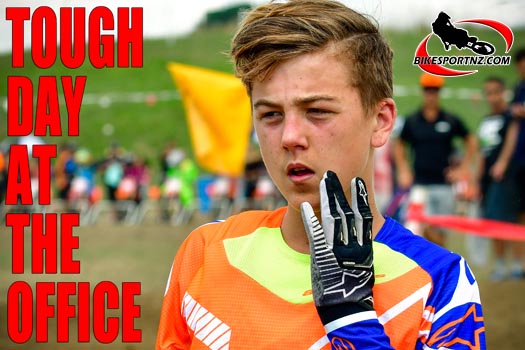 Canterbury man Walsh (Husqvarna) managed ninth and 19th in his two EMX250 outings and he now finds himself fourth overall in the championship after four of 11 rounds.

For Oparau’s Scott (KTM, pictured here) it was his first appearance in the championship this year.

He finished 33rd (after seizing his engine) and 23rd in his two EMX125 races.

While the MXGP and MX2 classes ran their points-paying races on Sunday afternoon, the EMX riders started their championship racing Saturday and finished it up with their second races early on Sunday.

A reversed track layout provided exciting racing both Saturday and Sunday in both classes but in EMX250 Race 1 on Saturday Estonia’s Karel Kutsar took the lead early and held it for the first 12 laps before Boisrame took the premier position away.

Team DIGA-Procross Husqvarna rider Walsh started in seventh but then battled with GL12 Racing’s James Dunn on his two-stroke KTM. Walsh originally took the spot as Dunn dropped two positions but the Brit and his two-stroke mounted a charge to pass Walsh who finished 9th later on.

Dunn then came under pressure from Rockstar Energy Husqvarna Factory’s Mikkel Haarup but edged out the Dane to take 6th with Haarup 7th as Boisrame won over Kutsar and Facchetti.

Race two was a completely different race for Haarup who took the lead on the first lap and never looked back. Running in second the entire race was Pocock but behind him early was Ceres 71’s Paolo Lugana. However after only two laps Lugana starting dropping positions eventually finishing 24th.

Race one’s winner, Boisrame started in 6th and battled with Martin Barr from the first laps. ASTES4-TESAR Yamaha’s Roan Van de Moosdijk was 4th on the first two laps but took over third from Lugana and held the position to the finish.

Facchetti who started the race 10th moved his way forward and on the last lap made a pass on Team Suzuki Germany’s Australian rider Jett Lawrence for fifth. Also making a pass on the last lap was Barr on Boisrame for fourth in turn giving Barr the red plate over his team-mate Pocock.

In the overall standings Boisrame took the win ahead of Haarup and Pocock while Barr keeps the Red Plate to Matterley Basin.

In the first race of EMX125, it was Yamaha Europe EMX125’s Thibault Benistant who took over the lead from fast starter Emil Jonrup after five laps. Jonrup however would then lose second to Raivo Dankers and 3rd to Rene Hofer before a big crash left him to finish 31st.

Dankers started to apply pressure to Benistant for the remainder of the race but couldn’t get by the young French rider. JD Gunnex KTM Racing’s Petr Polak came from 8th to 4th just beating out Yamaha Europe EMX125’s Jorgen-Matthias Talviku. Across the finish line it was Benistant who won over Dankers, Hofer, Polak, and Talviku.

Race 2 started out with Simon Laengenfelder leading and Polak chasing the Husqvarna rider. Meanwhile, race one winner, Benistant was off to a horrible start in 17th position and only managed to come back to 7th.

Hofer started 5th but starting to make passes early before getting held up behind Polak for second. On lap 7 Hofer made his way past the Czech rider and only two laps later took over the lead from Laengenfelder.

At the finish Hofer took the race win and overall victory while Polak managed 2nd in the race after passing Laengenfelder which when combined with his 4th in race 1 earned him 2nd overall. Finishing out the 125 podium was Benistant with his 1-7 finishes. Hofer now leads the championship by 23 points over Benistant as the riders will now head towards Teutschenthal, Germany for the next round in one week.