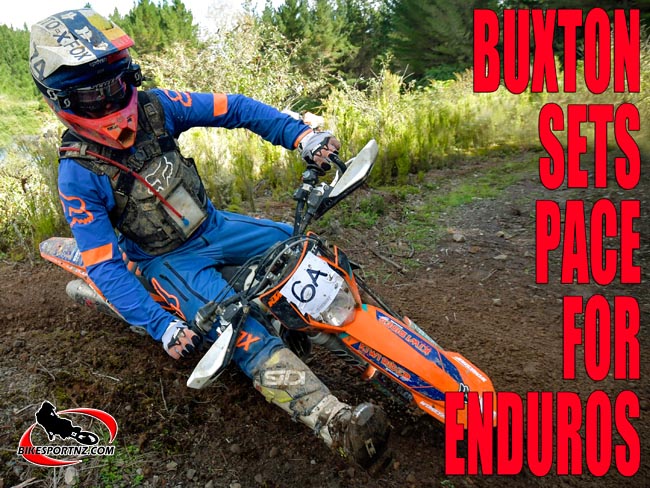 Helensville’s Tom Buxton has set a high standard that will be hard to match on the national enduro scene this year.

The 20-year-old KTM rider won both the opening two rounds of this year’s five-round New Zealand Enduro Championships series – round one staged near Whangamata on Saturday and round two held near Tokoroa on Sunday – and that’s a mightily impressive performance for a young man in only his fourth season in the top grade of competition.

He won the day at Whangamata on Saturday by just three seconds from 2016 national enduro champion Brad Groombridge, of Taupo, and he then followed that up by winning day two at Tokoroa by 21 seconds, on this occasion finishing ahead of Coatesville rider Sam Greenslade.

“My aim was to ride without making mistakes,” said Buxton.

“It was very slippery at Whangamata on Saturday and so I couldn’t be aggressive. It was different on Sunday, quite a fast course, but again I was being cautious.”

Unfortunately, this may be Buxton’s only two appearances in the domestic series this season as he now heads off next month for a “fun ride” in Romania and then a serious competitive outing in Austria, at the Erzberg “Iron Giant” from May 31-June 3.

This means that Groombridge, second in the overall standings for the New Zealand championships after these first two rounds, and Greenslade, third but just two points further back, become the two men most favoured to win the Kiwi crown this season.

Also impressive at the weekend was Cambridge’s Dylan Yearbury, who finished third on Saturday and then fourth on Sunday, and Paeroa’s Chris Power, who twice finished fifth overall, and they will also be expected to threaten for the outright title win this season.

Wainuiomata’s Jake Whitaker (sixth and sixth) and Stratford’s Josh Hunger (8-8) are also on target for a podium finish.

Round three of the series is set for Maruia, near Nelson, on May 26.