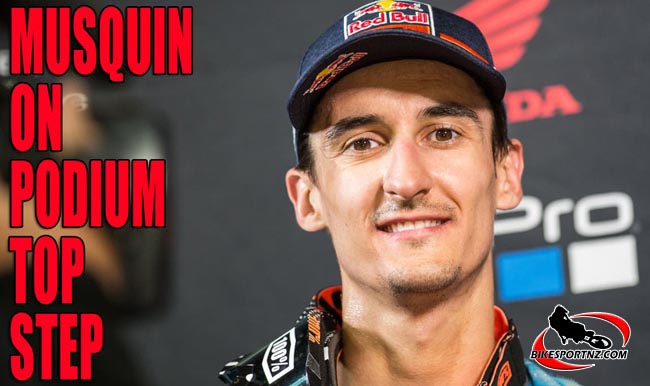 Frenchman Marvin Musquin celebrated his second 450SX victory of the season with a win at Indianpolis at the weekend.

The Red Bull KTM Factory Racing Team made big strides on Saturday with a successful night of racing at Round 12 of the AMA Supercross Championship in Indianapolis.

Frenchman Marvin Musquin led the team to its second 450SX victory of the season with a commanding win in the main event. In the much hyped 250 East West Showdown it was Honda’s Jeremy Martin who walked away with the win for the East Coast.

Musquin had a favourable start to the day as he topped the 450SX qualifying during the final practice session. From there, the Frenchman climbed his way to a fourth place transfer spot in 450SX heat two after getting pinched off on the start.

Musquin took only the positives into the evening’s main event as he shot off the line to capture the holeshot. With Eli Tomac hot on his heels throughout the first half of the race, Musquin handled the pressure well as he maintained a solid pace out front. Tomac eventually went down, giving Musquin some breathing room for the second half of the race.

After 27 laps, Musquin ultimately finished 29 seconds ahead of the 2nd place finisher, Dean Wilson. Musquin’s impressive performance allowed him to shave seven points off Jason Anderson’s lead in the overall 450SX championship as the series heads into its final five rounds of 2018.

“To be honest, I’ve been waiting for that win for a long time,” Musquin said. “The last win was at Anaheim I and I felt like I was riding better and better after I got used to the dislocated shoulder. I feel like I’m definitely capable of winning but you have to put everything together, and that’s not easy, but today it was good.

“We got the bike better this weekend and in the last practice I was riding really smooth and I was the fastest, so I was really happy. I knew I needed a good start and to race my own race and I was able to do that tonight, it’s good to be back on top.”

For Wilson it was a breakthrough performance after a horror year where the Scotsman has battled fitness issues following injury.

“The main result was awesome today,” said Wilson. “Qualifying went well, but I came into the heat race and got a bad start and ended up eighth. I got a good start in the main then made quick passes. The middle to the end of the race was tough but it’s awesome to get a second. I’m stoked.”

Anderson was collected in a first-turn incident and remounted at the very back of the pack. Meanwhile at the front, Wilson ripped his best main event start all year and was right in the top-three battle during the opening laps.

Wilson would battle the difficult track and fend off multiple challenges from other riders for the entire 27-lap main event to keep himself at the front and grab his first career 450 Supercross podium with a superb second-place just ahead of Daytona winner Justin Brayton who claimed the final spot on podium for the round.

Anderson came alive and immediately cranked out fast laps and eventually climbed his way back to 4th to retain the championship leaders red plate.

“My weekend turned out to be good,” said Anderson. “I went into the pileup in the first turn in the main event, but I worked as hard as I could to make it to fourth. It was good”

Geiko Honda’s Jeremy Martin made the opening 250 East/West shootout his own with a convincing wire to wire win in the 15 minute plus one lap main event.

Martin shot to the lead early and was never headed as he ran away to win by four seconds, and though he was officially credited with the race win, Martin was later docked seven championship points for jumping on a red cross flag.

Monster Energy / Pro Circuit Kawasaki’s Adam Cianciarulo, who worked his way through the field at an impressive rate to land on the podium, while Luke Renzland put in a career-best ride to round out the 250 main event in third position.

Showing why they both currently lead their respective series, both riders charged through the field, with Star Racing Yamaha’s Plessinger working his way all the way up to 4th place to retain his spot at the top of the 250 West championship by nine points over Joey Savatgy, while Osborne holds a seven point lead over Austin Forkner.

There series will now take a one week hiatus over the Easter Weekend, returning for round 13 in Seattle on April 7. 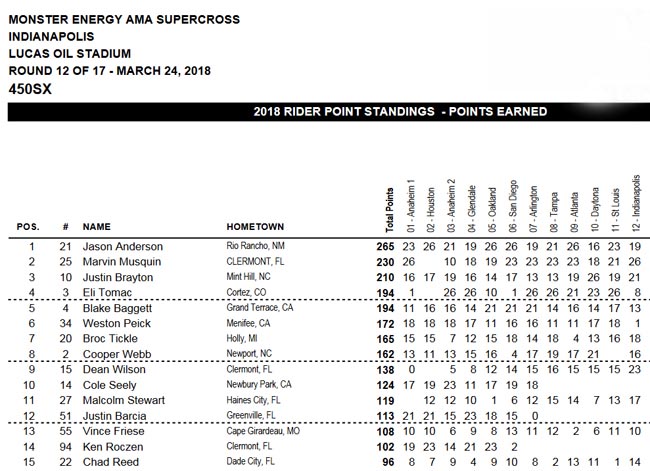 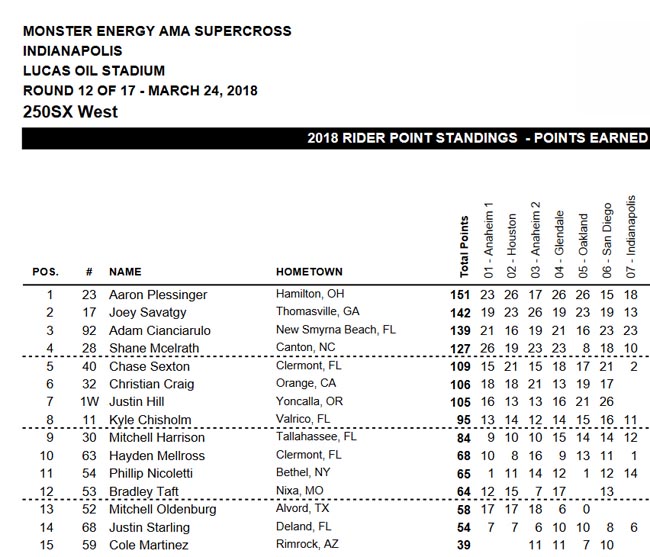 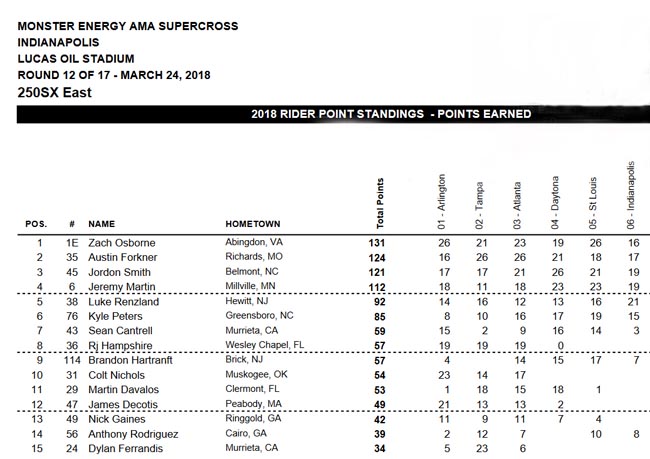