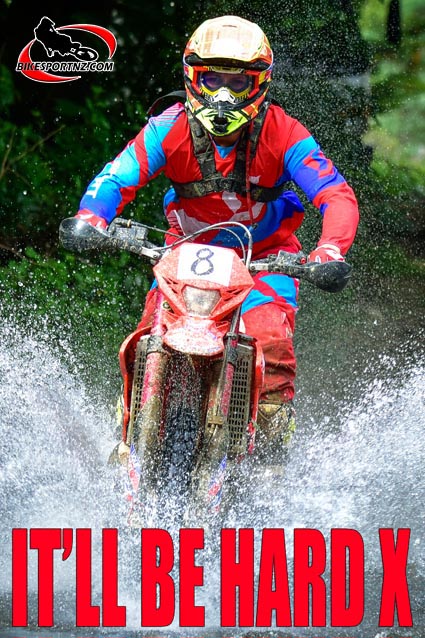 Napier’s Mackenzie Wiig, sure to be among the frontrunners at the Husqvarna Hard X event in the Kinleith Forest, near Atiamuri, on Saturday. Photo by Andy McGechan, BikesportNZ.com

It could be New Zealand’s ultimate of extreme cross-country race, but don’t be frightened off by the event’s daunting title, because it will appeal to all levels of ability.

The Husqvarna Hard X event in the Kinleith Forest, near Atiamuri, this Saturday is a four-hour cross-country race that will “feature all the great trails and hard bits of a Husqvarna Hard Adventure Enduro, but on a compact course, with hard sections deemed suitable for the grade that the rider enters”.

Organiser Sean Clarke said the event, from 11am until 3pm, would have mass appeal.

“This is the first time we have held a Hard X event,” said Clarke, who has previously run the difficult Husqvarna Hard Adventure Enduro Events in the same area of the country.

“This Hard X event is to show riders what the three-day hard enduro is like but in a compact way,” he explained.

“It will be a lot easier to enter and ride. Riders don’t need a GPS device on their bikes, they don’t need head lights or tail lights and they don’t need to be concerned with the thought of six hours of gruelling riding, like what they might encounter at a hard enduro.

“The course is approximately 25 kilometres in length, that riders will traverse several times during the four hours, and it will feature a “good mixture of single trail, firebreaks and a few hard bits thrown in for good measure”.

Riders classify themselves as either Gold, Silver or Bronze grade competitors and the course they’ll face will hopefully reflect that level of proficiency.

“Entries are still open, although riders may still enter on the day if they are waiting to see what the weather is going to do, but it is looking like it will be fine, with maybe just a few showers.

“Everyone is probably thinking it’s going to be a psycho-hard event, but it’s not.”

Clarke said the Bronze class would be about the same level as a hard section at a trail ride, with the Silver and Gold class courses will be just a little bit harder than that.

“If you have ever thought what the world-renowned Romaniacs enduro (in Romania) is like to compete at, well the Gold class at this event is about the same as the Bronze class over there. So we call for riders to come and give it a go,” said Clarke.

“It will also be an awesome event for spectators because there is plenty to see that is handy to the pit area, which is an old quarry.”

Saturday’s venue will be signposted on State Highway 1, 30 kilometres south of Tokoroa.