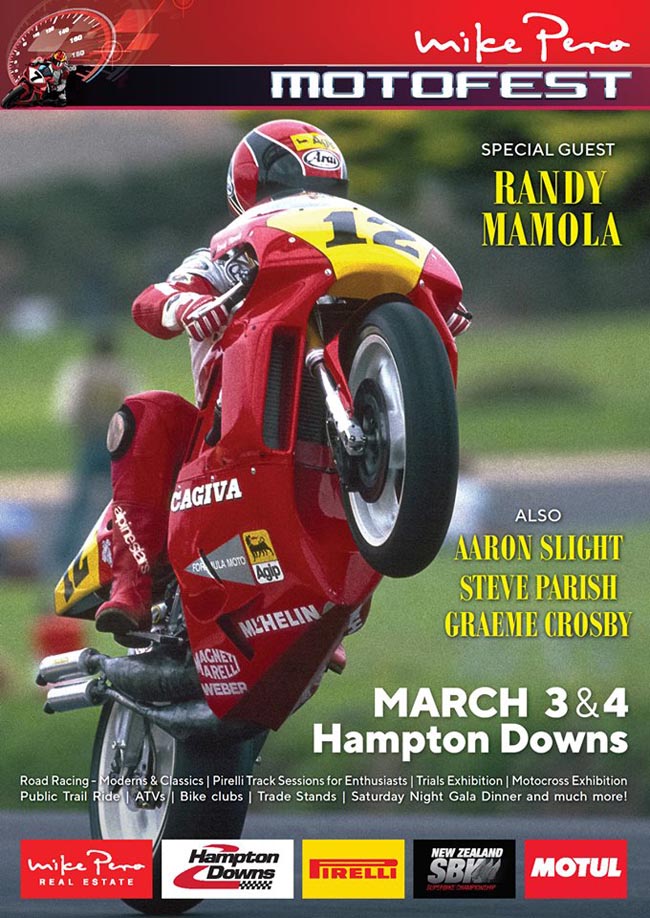 Hampton Downs could be classified as New Zealand motorsport’s “centre of excellence” when the Mike Pero MotoFest erupts there in the first weekend of March.

A massive part of the March 3-4 weekend will be the running of the third round of four in the New Zealand Superbike Championships and, while that is significant in itself, it will really just be one phase of the huge spectacle that will be on offer to bike fans.

The world-renowned race track, located midway between Mercer and Huntly, will host a wide assortment of motorcycling activities over the two days and, with international superstars such as American Randy Mamola, Englishman Steve Parrish, Australian Robbie Phillis and New Zealander Aaron Slight, among others, in attendance at the weekend, there will be plenty to enthral the crowds.

“I’m pretty sure nothing like this has ever been done in New Zealand before,” Marsden said.

“Our plan is to grow the event over the next three years into the biggest on the motorcycle event calendar.

“The Franklin Farm freestyle motocross team will thrill the crowd with aerial action on the main Skid Pan, while the Kawasaki Public Trail Ride, which will be run on adjacent farmland, gives families and enthusiasts the chance to go for a ride and then enjoy all other aspects of the events – this is really quite unique as is the track time for are offering road riders each day on the international circuit,” said Marsden.

“Rounding out the entertainment is the Star Insurance Bike Show and the Alpinestars Legends Dinner being staged on the Saturday night of the event.”

The Motul Stadium Moto Trial event is expected to be one of the major spectator attractions over the two days.

A tricky course has been imagined by former New Zealand champion Andrew Poad, with help from A Grade exponent Phil Shilton, and they will set out between six and eight “diabolical” sections, with obstacles in the arena that will include wooden towers, concrete pipes, a couple of shipping containers, two Volkswagen cars, wire spools and concrete blocks.

“Spectators will be able to see the event from above the arena area, viewing from the grass bank by the footbridge,” said Motul Stadium Moto Trial event manager Tony Perkins.

“Each section will be tackled by the riders before moving on to the next one. This will prevent spectators missing out on the attraction with too much happening at the same time.”

Helping to explain to the crowd the gravity-defying action them will be well-respected moto trials commentator John Ravenscroft, from Te Kuiti.

“There will be a break during the main Superbike races, as this is one of the main attractions of the weekend. The Moto Trial will be over the two days and riders will be competing for the ‘Stadium Trophy’ and prize money.”

Ball is only 13 years old, but already he has shown he has the potential to go on and perhaps emulate the international feats of legendary and world-renowned Kiwi Stefan Merriman, the Tauranga man who was a former world moto trials champion before going on to become a multi-time world enduro champion.

Ball is the current and two-time Australian open junior champion and four-time New Zealand under-17 champion and he has just returned from a trials training camp in Spain.

“Keep an eye on this kid. He will be a top rider. He has awesome potential to reach the highest level of the sport,” said Perkins.

With this branch of motorcycling sport, the emphasis is not on speed, but on fine balance, bravery and throttle control.

The prime aim is to conquer the extreme terrain without touching feet on the ground or falling off. Points are lost for these “faults” and a rider with the lowest score wins.

Wellington’s Jake Whitaker puts on a display at a recent arena trial exhibition. Photo by Chocolate Dog Design and Photography