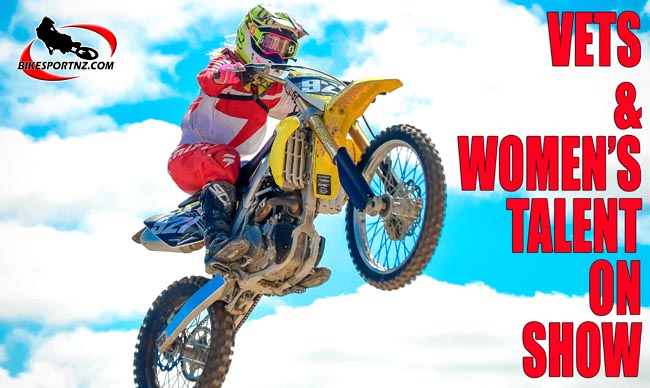 Champions of the past, present and future will go head-to-head at the New Zealand Veterans’ and Women’s Motocross Championships in Taranaki this coming weekend.

It will again be two national champion events for the price of one, with racing over two days for both the elite females, in both the junior and senior grade, and the country’s top male riders, all of them aged over 30 years.

This 2017 edition of the vets’ and women’s nationals will be held on a circuit not previously used for national championship events – the freshly-groomed Hack Track, located between Hawera and Eltham – making it a level playground for all competitors this Saturday and Sunday, November 25-26.

The popular annual event will feature many riders who, despite their veteran status, still rate among the sport’s elite, while the female side of the sport that shares the race programme will be no less intense.

The champion last year in the senior women’s division, Kiwi international Courtney Duncan, from Otago, has not entered this time around, throwing wide open the battle for that title.

One rider who should consider herself a contender for senior women’s 17-29 years’ grade glory is Taranaki rider Taylar Rampton (pictured above).

The Opunake woman finished runner-up to Duncan in every race at the women’s nationals last season and, although that should almost be enough to guarantee her status as title favourite this time around, she knows she’ll face a tough time from Motueka sisters Skye and Tyla Edwards.

Last season’s champion in the junior women’s 12-16 years’ grade, Te Awamutu’s Rachael Archer, will be back to defend her title and there she will face up to a third Edwards girl, Roma Edwards, and an on-form Shelby Catley, from Tauranga.

Late entries are still expected to arrive from defending champions in several of the veteran men’s grades, although Blenheim’s Moston Wadsworth is one individual who has indicated that he’ll be back to defend his title in the veterans’ 55-59 years’ division.

Former veterans’ world champion Tony Cooksley, of Papakura, should be untroubled to win the over-60 years’ all capacities division.

The 61-year-old Cooksley finished third-equal  in the World Veterans’ Motocross Championships in California last year, level on the score-sheet with American former factory rider Chuck Sun, although the Kiwi was relegated to fourth overall on count-back.

Racing kicks off at 10am both days and spectator entry is free.

The venue is located at 5271 Mountain Road, Eltham.