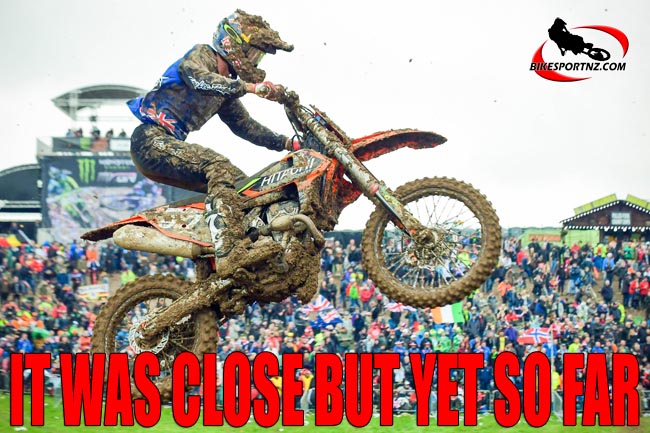 It was a courageous effort, but Team New Zealand could not quite repeat a top-20 result at the weekend’s 71st annual Motocross of Nations in the United Kingdom.

This was a “must win” race and, early on, with just two of the three results to be counted, it looked as if they might succeed.

However, even with Natzke finishing third and Harwood seventh, and the Kiwis discarding Cooper’s 14th placing, it wasn’t quite enough to edge out the solid finish of the Slovakian team.

Slovakia was therefore granted a start in Sunday afternoon’s main races (where they eventually finished 19th overall of the 38 nations represented) and Team New Zealand packed up early for the long trip home.

“It’s extremely frustrating, but that’s the way of things with this sport sometimes. It is gut-wrenching to miss out on direct qualification by just one point, Russia outscoring us by just one position on the track. Then to miss out on winning the B Final by just four points from Slovakia … well, it’s depressing.

“It was a case of close but yet so far, and so far away from home too.

“We had some really good mud riders, but even they were struggling in these conditions today. We’ll be back. Kiwis don’t give up.

“I want to make a special mention of our sponsors – including Battle of the Clubs, Taupo; Crown Kiwi; Artistic Media and Motorcycling New Zealand – and the whole New Zealand motocross community, without whom we could never have attempted this.”

Team France won the event outright, making it a fourth consecutive year that they have taken away the coveted Chamberlain Trophy.

Runners-up were the men from the Netherlands, with host country Great Britain claiming the third step on the podium.

The Motocross of Nations will be staged at the Red Bud circuit, near Chicago, in the United States next year.