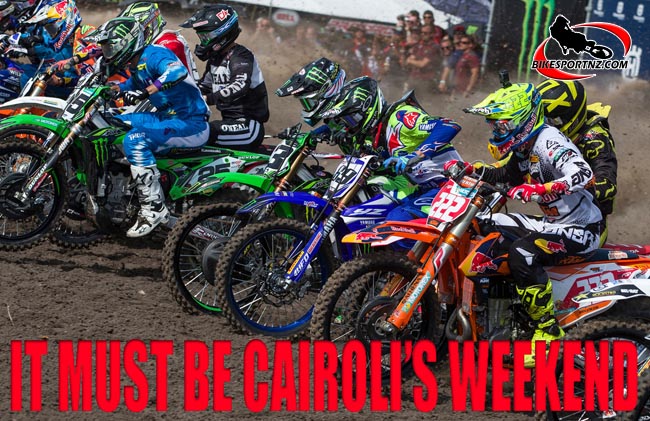 Red Bull KTM Factory rider Antonio Cairoli goes into this weekend’s MXGP of The Netherlands, the 18th round of 19 set for the MotoGP circuit in Assen, with one thing on his mind, and that is his ninth motocross world championship.

Both as Yamaha riders they shared the celebrations, one just a year away from retirement, the other starting what would be a career of world championships and GP victories.

With 83 Grand Prix victories to his name, and a long list of international success, the Sicilian can rest easy on a career that has been just unbelievable. But riders like Cairoli don’t seem to ever be satisfied as they go for more and more.

The greatest rider of his era, and possibly the greatest GP competitor of all time, it is sure he will enjoy this coming weekend. All he needs is a top ten in the opening MXGP race to win the championship and relax for another six months before the 2018 season begins.

“I hope I will make it (win the championship) in the next GP in Assen,” Cairoli said. “Which is a track I really like, and hopefully I can clinch the title in the first race, and then after that have some good battles. Together with Jeffrey (Herlings) we have showed that we have some good speed lately and we are ‘there’ most of the time.”

Cairoli has had to play second fiddle to his KTM team-mate Herlings the last month or so as the Dutchman took victories in Belgium, Switzerland and USA. One thing we all know about Antonio Cairoli, is that he will want to be on the top of the podium sooner, rather than later.

“I’m always happy to finish on the podium and in a season like this it is important to be consistent and that’s what we have done: one of my best seasons ever. I want to get the title as soon as possible because I have been riding a bit carefully in the last races. I don’t want to crash or break something. I did my best to close it last weekend, and I made a mistake but this is part of racing and also my condition is dropping a little bit since the beginning of the season while Jeffrey is the opposite way and is in a good place. I am a fighter and always want to fight back.”

So, let’s all make sure we get to Assen in Holland this weekend. The legend of Antonio Cairoli continues, and seeing history being made is always a pleasure.

For the Dutch fans, a GP victory for Jeffrey Herlings will make their weekend fun, and then we also have the MX2 battle between Pauls Jonass and Jeremy Seewer, which could also decide a world championship if Jonass can pick up a handful of points on the Suzuki rider.