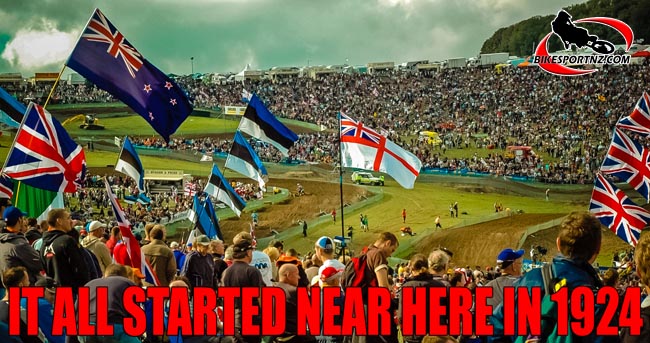 Matterley Basin in the UK, when it hosted the MXoN in 2006. And the MXoN is back at the same venue this year. Photo by Andy McGechan, BikesportNZ.com

Motocross has come a long way since its humble beginnings in the 1920s … actually in a paddock just down the road a few kilometres from the venue for this year’s Motocross of Nations.

The sport was in those days known as “scrambling” and the first known scrambles event was held in Surrey, England, in 1924.

This was when a group of British motorcycling friends got together in Camberley, in Surrey, to stage their own version of Yorkshire’s famous Scott Trial, but without the “observed” sections of the trial.

Because it did not have these observed sections, the sport’s governing body, the Auto Cycle Union, could not grant it trials status, and one of the 80 competitors remarked at the time that this would be a ‘fair old scramble’.

A new sport had been born.

The race took place at Frimley, in Surrey, and the winner was a man called Arthur Sparkes.

More than half the entrants were forced to retire because of the rigors of the course and machine failure but it was still considered a huge success.

Prior to World War Two, the sport was primarily a British pursuit but it soon caught on across the English Channel, in Belgium, France, Germany and the Netherlands.

The bikes used were not much more than road bikes with all-weather tyres, similar to what the army courier and dispatch riders would to use during World War Two (between 1939-45).

They were heavy, underpowered, and equipped with rudimentary suspension systems that did little to smooth out the rough terrain. But motocross had two undeniable elements that promised the sport’s future success: It provided an affordable but highly challenging sport for participants, and offered incredible, up-close action for spectators.

The FIM held the 500cc displacement formula European Motocross Championships in 1952 that was subsequently upgraded to World Championship status in 1957, followed by a 250cc equivalent in 1962, when two-stroke motorcycles began to make their mark in the industry.

Over the years, the sport evolved and its popularity increased, particularly in the 1930s in Britain where events involving teams from various districts and companies would regularly be held. Bikes used in those competitions at the time would be barely distinguishable from those used on the streets. BSA and Nortons were the powerful British brands that gave the British riders an edge over their rivals.

As the competition intensified and the terrain increased in difficulty, the technology used for the design of competition and special-event motorcycles would improve, particularly with the introduction of the swinging arm suspension during the early 1950s.

Various companies throughout Europe from countries such as Sweden, Czechoslovakia and Britain thrived by creating models that became renowned for their lightness and manoeuvrability and slowly the BSA and Norton brands became a thing of the past. The introduced improvements in motorcycles during the 1960s would relegate the older and heavier four-stroke machines to smaller, niche events. 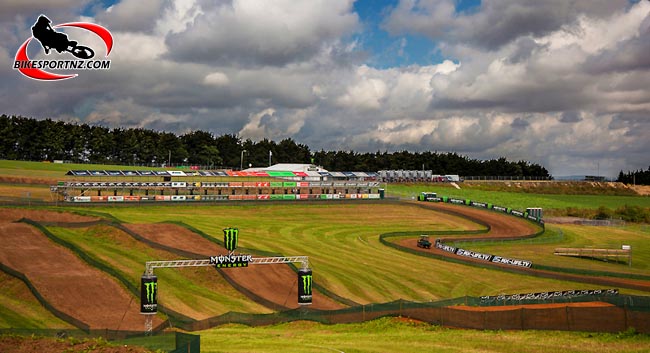 Matterley Basin, in all its splendour.

But it’s now 16 years since Britain’s last FIM World Motocross Championship success (with Dobb) and 23 years since Team Great Britain won the Motocross of Nations (at Roggenburg, in Switzerland in 1994, with the trio of Kurt Nicoll, Rob Herring and Paul Malin).

It will be a new crop of British riders who try and uphold their nation’s honour at this year’s edition of the Motocross of nations.

In just over a week’s time, near Winchester, in England (on the weekend of September 30 and October 1), UK riders Max Anstie, Tommy Searle and Dean Wilson will try to again win the Motocross of Nations, just 50 kilometres up the road from the 1924 birthplace of the sport.

Matterley Basin in the UK, when it hosted the MXoN in 2006. Photo by Andy McGechan, BikesportNZ.com