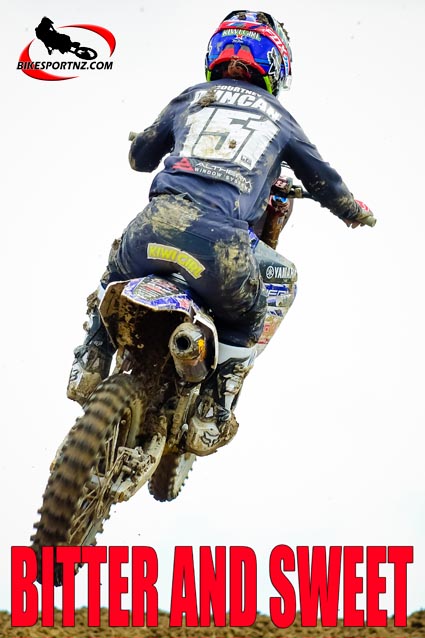 It was with terribly mixed emotions that New Zealand’s Courtney Duncan wrapped up her 2017 Women’s Motocross Championships campaign in France at the weekend.

She lapped all but one rider on her way to winning the last race of the year, but she ultimately had to accept the No.3 position in the final championship standings.

The 21-year-old from Palmerston, in Otago, has consistently proven herself to be the fastest motocross woman on the planet again this season, but, for a second consecutive year, she has been forced to swallow a bitter pill.

This year’s six-round competition took the best riders in the world to five different countries – the series twice visiting France – and not once was Duncan afforded the comfort of racing on home turf, but she knuckled down to the task at hand and, at several stages throughout her 2017 campaign, the Altherm JCR Yamaha Racing Team rider led the championship standings.

Duncan took her Yamaha YZ250F to top the podium at the series opener in Indonesia in March and then she extended her lead in the championships at round two in Italy a month later, stretching her advantage out to six points over No.2 woman in the title chase, fellow Yamaha star and Italy’s former world champion Kiara Fontanesi.

It was a case of damage limitation for “Kiwi Girl” Duncan after the tragedy of having another rider clip her while in mid-air in race one at round three in Ernee, France, sending her sprawling to the ground.

She picked herself up and fought back and was challenging for second position when she crashed again and out of the points.

Duncan bounced back to win the weekend’s second race in France, but the damage to her campaign was still massive and she had slipped to third in the standings.

Duncan won the Czech GP, the fourth round of six, in July and reclaimed the series lead, before slipping back to second overall after a difficult weekend at round five at Assen, in The Netherlands, just over a week ago.

Duncan arrived at the weekend’s sixth and final round at Villars-sous-Ecot, in France, trailing Dutch Yamaha rider Nancy Van de Ven by just two points and, with just five points to separate the top four riders, anything was still possible.

But that’s when everything went horribly wrong for Duncan.

She was out in front of race one on Saturday, with a massive 20-second lead over Fontanesi, when, on the final lap, she had to take evasive action to avoid a group of riders who had fallen on a steep jump face.

Duncan’s bike slid on the muddy grass and became wedged under a fence.

She recovered to finish sixth in that race, but that result had dropped her to fourth in the world standings and nine points behind series leader van De Ven with just one race the following day to wrap up the series.

Duncan convincingly won Sunday’s final race, crossing the line a whopping 46 seconds ahead of runner-up Livia Lancelot, the defending world champion from France, but Duncan’s 6-1 score-card from the weekend was not quite enough and she eventually had to settle for a world ranking of No.3 for 2017.

Fontanesi won the world title by one point from Lancelot, with Duncan third overall, agonisingly just one point further back (equal with van de Ven, but ahead on a count-back).

“She qualified well and we knew for the racing she’d be good,” said Coppins.

“She was leading the first race and it was hailing and then there were five girls stuck on the uphill. She crashed trying to get around them.

“We took it (the result) to the jury and they rewound the results to the previous lap (before the track had been completely wrecked, therefore assigning the win to Duncan).

“But then the FIM (the world governing body) took legal advice and decided they hadn’t followed the correct procedure with the red (stop race) flag and so therefore they had to revert to the original race result, leaving Courtney sixth instead of first. Deliberations took four or five hours.

“On day two Courtney dominated. She lapped all but one rider, including lapping the new world champion (Fontanesi),” Coppins said.

“Unfortunately we are at the end of our second season of what should-have-been or could-have-been and bad luck and unforeseen circumstances, all out of Courtney’s hands, have taken two world titles away from her now.

“In saying that, we know that in this class these things can happen because there a huge difference between the lead riders and lesser riders. We have to be ready and do our very best to maximise the point at each GP. Naturally we’re disappointed … Courtney is disappointed. We can only learn from this and try to be better next year.

Magnanimous in defeat, Duncan took it all in her stride.

“I rode as hard as I could in that second race and actually lapped the new world champion, which made me feel a little bit better,” she said.

“I’ve turned the page and am looking ahead to next year. I’ll be looking to minimise some of the mistakes I made earlier in the year and I’ll be back for another attempt on that world title.”

Duncan notched up four wins out of her 12 starts in the 2017 WMX championships, more than any other rider – Fontanesi and Lancelot scored two wins each, van de Ven won on three occasions and Belgian rider Amadine Verstappen won the other race.