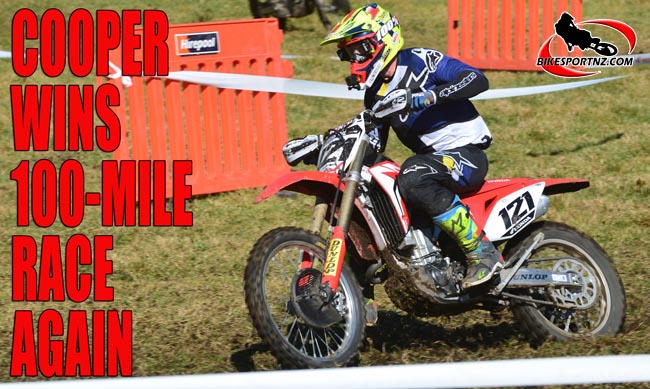 The 33-year-old won his sixth national MX1 motocross crown earlier this year and at the weekend he made it a fifth time that he’s now also won the fabled Tarawera 100 cross-country marathon.

Cooper was at his scintillating best when he won Saturday’s 40th running of the great event at Te Teko, near Whakatane.

This famous Bay of Plenty race is a brutal 100-mile (160-kilometre) affair – the distance that gives the marathon its name – and Cooper’s win on Saturday put him level with former dirt bike great Wayne Jennings as a five-time Tarawera champion.

“I guess I need to come back and win another one now,” Cooper joked.

Cooper was impressive as he took his Honda CRF450RX to victory on Saturday, crossing the finish line nearly four minutes ahead of Taupo’s defending Tarawera trophy holder and current national cross-country champion Brad Groombridge, but the four-lap race perhaps wasn’t as easy as he made it look.

Cooper won the Tarawera 100 for the first time in 2007, then backed that up by winning it three more times, in consecutive years between 2010 and 2012, but he knew it would be difficult to win again this year, as usual facing a solid line-up of other top-class dirt bike racers with varying degrees of motocross, enduro and cross-country backgrounds, and each one of them tough and extremely capable of winning the arduous battle.

“I was a bundle of nerves at the start … but I guess everyone is with this race,” said Cooper.

“It’s hard to get used to starting a race with a dead engine. Just as well I had the electric start Honda CRF450RX, because it allowed me to grab the holeshot.

“I had (fellow Honda star from Tauranga) Peter Broxholme for company at the front and then Brad Groombridge caught up.

“I was riding a little cautiously because I wasn’t too sure where the track went and the track marker arrows were a little confusing for me. It meant I missed a corner while leading and I had to double back and see where I went wrong.

“Brad (Groombridge) passed me, but I got back by him at the first re-fuel stop. I got held up by lappers on lap three and this helped Brad to reduce the gap. I pitted again for fuel and that’s when Brad got past me.

“I stayed on his rear wheel and, on the final lap, I discovered the line I should have been taking earlier. I passed Brad and then simply pulled out a gap on him … out to nearly four minutes in the end.

“The new bike was perfect for the job and having the electric start was great.

“I might be 33-years-old now, but I’m older and wiser,” he laughed. “I’m winning more races now than when I was younger.”

Cooper will continue to work now to build-up for racing at the Motocross of Nations in England on the first Sunday of October. He will be joined by fellow Mount Maunganui man Rhys Carter and Hamilton’s Josiah Natzke in forming the three-rider New Zealand team for this “Olympic Games of Motocross”.

When he returns from Europe, he will attempt to again win the annual Honda Summercross at Whakatane and then the Honda New Zealand Motocross Grand Prix at Woodville in the New Year. His national motocross championship title defence will begin straight after that.