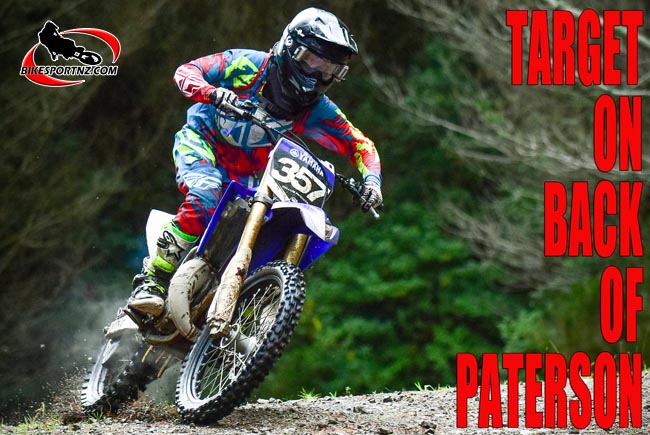 Waikato teenager Callum Paterson has never before raced at the sandy Taikorea Motorcycle Park facility, on the outskirts of Palmerston North, but that’s no reason not to expect him to win there on Sunday.

The 15-year-old, a year 11 pupil at Cambridge High School, may also not have the years of experience that many of his rivals possess, but the young rider will still probably be favoured to win the junior grade at this weekend’s fourth round of seven in the popular Yamaha-backed NZXC cross-country series at Taikorea.

This is particularly so when considering that Paterson seems to be getter faster and more confident with each passing month.

Paterson took his Blackwood Yamaha YZ125 to finish the day third overall – behind great rivals Beau Taylor (KTM), of Cambridge, and Tokoroa’s Nick Wightman (Husqvarna) – at the NZXC Series opener near Tokoroa in May.

Cambridge’s Paterson backed that up by finishing runner-up, behind Wainui’s Ben Capel (KTM), at round two in the Woodhill Forest in June and then he won the day at round three, again near Tokoroa, last month, with Taylor and Wightman respectively finishing second and third on that occasion.

That puts Paterson 20 points clear at the top of the junior grade standings at the start of this Sunday’s 90-minute race.

“I’ve never been to Taikorea before, but I’ve heard a lot about the place and I’m riding well at the moment,” said Paterson.

“My fitness is good and the 90-minurte race should be no problem, even in the sand.”

Paterson raced motocross in the 65cc class when he was aged nine and 10, but, as his father’s work-load increased and demanded more of his time,  the young rider had to put his racing on hold.

He returned to the race scene only late last season and tasted immediate success.

“I raced the opening round of the cross-country nationals at Dannevirke earlier this year and I was right back into it,” he said.

The event is being held on the land owned by series founder Whibley and he’s won all three senior grade races in the series thus far, but he’ll be heading overseas shortly and so his absence should open up the competition to a fresh winner.

Racing kicks off Sunday at about 10am for the juniors and 12.30pm for the seniors.