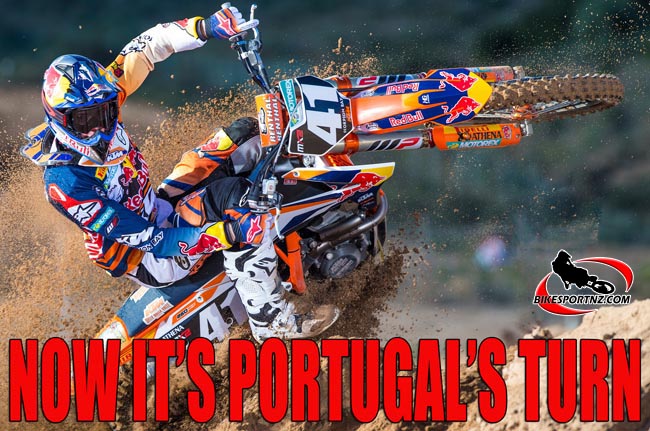 This weekend the 12th round of the FIM Motocross World Championship will be held in Agueda for the 2017 MXGP of Portugal.

MXGP’s last visit to Portugal was in 2013 but this weekend’s racing will undoubtably be of a new flavour as the track has been almost completely changed. The weekend will be hosting not only MXGP and MX2 but the European championship classes of EMX250, Honda EMX150, and EMX125 Presented by FMF Racing.

Red Bull KTM Factory Racing’s Antonio Cairoli, just days ago scored double race wins at his second home GP of the season. Cairoli’s win in Italy gives him a 67 point championship advantage coming into Agueda however in Cairoli’s last visit to Portugal in 2013 he placed second.

Rockstar Energy Husqvarna Factory Racing’s Gautier Paulin has been a winner this season already and has found memories from the Portuguese circuit where he won the overall in 2013 and he was second the two years prior. Paulin is also again second in the points after Lombardia.

Monster Energy Kawasaki Racing Team’s Clement Desalle went from two GP overall wins in a row to finish 7th in Italy. There is something about Portugal that works well for Desalle though, from 2009 to 2013 he won three overalls and he still reached the podium the other two times. Desalle’s recent success mixed with his history here may again land him on the top spot.

Red Bull KTM Factory Racing’s Jeffrey Herlings was the only rider to really challenge Cairoli in Italy and after coming up just short he will want to prove his speed by winning again in Portugal. Herlings won his past three times to Agueda in MX2 and now would like to add a Portuguese MXGP overall to his CV.

Team HRC’s Tim Gajser returned from injury last weekend and he had some impressive speed at times. As his injury continues to heal he will most certainly climb the rankings again.

For Husqvarna 8Biano Racing’s Rui Goncalves Portugal will be a home GP. The veteran will look to use his experience to snag a season best result in front of the home crowd.

Red Bull KTM Factory Racing’s Pauls Jonass (pictured above) lost a small chunk of his points lead in Italy after a 6th place finish in race 1. Though Jonass still has  a formidable 38 points over the 2nd he will be striving for growing it out again in Portugal.

Suzuki World MX2’s Jeremy Seewer has been chasing Jonass most of the season but out-performed the Latvian the last time out. To propel Seewer toward winning Portugal he has the momentum of his 3rd overall win and the added bonus of gaining championship points on Jonass’ lead.

Rockstar Energy Husqvarna Factory Racing’s Thomas Kjer Olsen holds down third in the championship but only 4 points ahead of LRT’s Julien Lieber. Olsen struggled in the Italian heat with 10-6 finishes and 9th overall. Knowing he can battle for the win Olsen will again try to do so in Agueda. Meanwhile Lieber had his best race result in weeks after scoring 3rd in Lombardia’s race one.

Kemea Yamaha Official MX Team’s Benoit Paturel had bad starts in Italy reminiscent of the first half of the season, but at the same time charged through the pack. Missing the podium by one spot even after the lacking starts last weekend he is a definite podium contender for Portugal.

Red Bull KTM Factory Racing’s Jorge Prado Garcia took the holeshot during race one of Lombardia but was later overcome by the heat and did not line up for race 2. Focused on this weekend the Spaniard will look to bounce back.

The HSF Logistics rider, Brian Bogers, is making strides in his racing the past two races with a podium in Russia and battling for the lead in Italy. Watch out for the #189 this weekend.