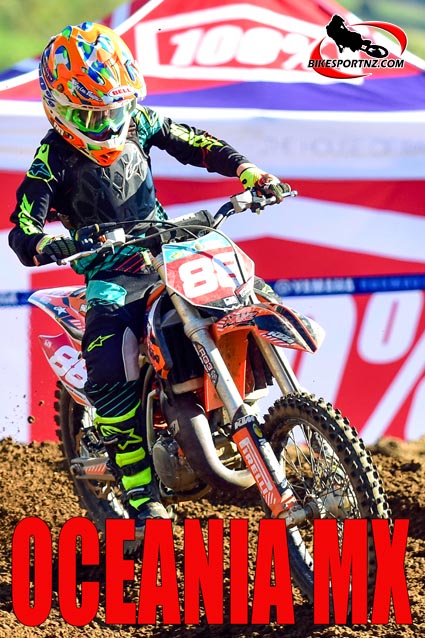 Matamata’s Brodie Connolly (KTM), likely to be one of the Kiwi crew to tackle the 2017 Oceania Championships after he won the 12-14 years’ 85cc class at the New South Wales junior state titles event at Lake Macquarie, Sydney, last week. Photo by Andy McGechan, BikesportNZ.com

There is perhaps no greater international sporting rivalry than the one that exists between Pacific Ocean near-neighbours Australia and New Zealand.

Whether it is on the rugby field, the football pitch or the netball court, the love-hate relationship between sporting teams from Australia and New Zealand has flourished over the years and now the battle will again extend to motocross tracks in the two countries.

Australia and New Zealand are separated by just a short hop across the Tasman Sea and, until recent years, had regularly gone into battle with the Oceania Motocross Championships.

This competition has now been resurrected this year, for the juniors at least, and the 2017 FIM Oceania Junior Motocross Challenge will be held in Horsham, in Victoria, on the weekend of September 30-October 6, as a part of the Australian Junior Motocross Championships.

New Zealanders entered in the event will be “matched up” with an equal number of Australia riders at the event, also aligned by age and category, and this will constitute the riders representing the two rival countries. It will showcase both Australia’s and New Zealand’s best up and coming junior motocross talent at the renowned event, with plenty of pride on the line.

FIM Oceania and Motorcycling New Zealand Board member Ray Broad, of Ngatea, said the building of the FIM Oceania relationship between Australia and New Zealand was “quite important”.

“We’re putting in the necessary steps in place to bring that relationship to the next level, and focusing on junior development has been the priority. The FIM Oceania Junior Motocross Challenge is the natural progression of that relationship.

“Just to keep things simple, any New Zealand rider who enters the Australian junior nationals will see their points go towards the Oceania Junior Motocross Challenge and the Australians will match us with an equal number of riders.

“We have already been approached by one New Zealand club keen to host this event next year. Once we see what Australia riders cross the Tasman to face us next year, we’ll then form a New Zealand squad to match them.

“We want to give our support to riders who want to compete at this level, perhaps above where they’d normally ride, and it will put them a little bit outside their comfort zone.

“The riders are also extremely excited to be a part of a team and to be competing in an intercontinental championship, rather than just an internal championship.

“The Australian Junior Motocross Championships is one of the largest motorcycle events by numbers, so it’s a phenomenal opportunity for the FIM Oceania to be involved in. The event also fosters junior development and develops the motocross stars of tomorrow,” Williams said.