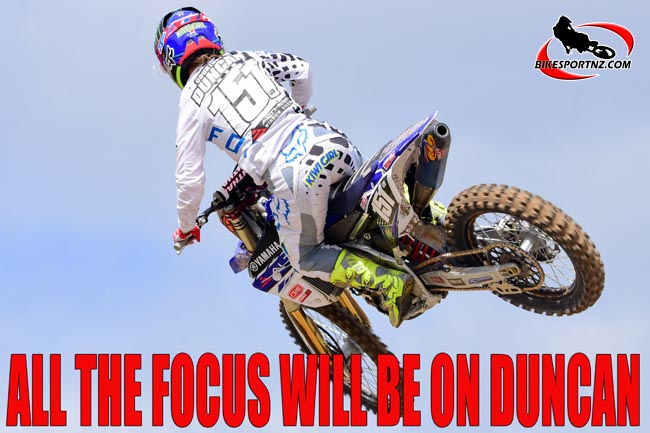 All eyes will focus on Otago’s Courtney Duncan this weekend.

The Altherm Yamaha Racing Team rider from Palmerston will likely be centre of attention when the racers line up at the fourth round of six in this season’s Women’s Motocross World Championships (WMX) at Loket, in the Czech Republic, on Saturday and Sunday.

With the series at the halfway stage, the 21-year-old is third overall in the championship standings and just seven points separate the top three riders.

Duncan led the 2017 championship standings after the opening round in Indonesia in March, but she has had to deal with several set-backs since then.

Of these leading riders, Duncan is the only one to suffer major misfortune, crashing out of one of her two races at round three of the series, the French GP at Ernee, in the north-west of the country, back in May.

Another rider clipped Duncan while they were in mid-air in race one, sending her sprawling to the ground.

Duncan picked herself up and fought back and was challenging for second position when she crashed again.

She was cleared to race the following day by medical staff and Duncan’s response was inspirational as she battled through traffic to eventually take a three-second win over Lancelot, who had won the previous day’s race.

Of the six races in the three rounds thus far, Duncan has won two of them and finished runner-up in another. Lancelot is the only other rider to win twice this year.

The feisty New Zealander has a positive mind-set ahead of this weekend and the following two GPs that will wrap up her campaign.

“I’ve been getting some good quality training on all different track conditions, so that’s been great,” she said.

“If I limit my mistakes, focus on riding my own laps and finish with a solid weekend, I’ll be more than happy.”

As with all the previous rounds of the world series, Duncan’s visit to Loket will be her first time at the circuit, although she’s been a fast learner and is not perturbed by this.

Duncan has proven to be a revelation on the women’s scene right from the first time she raced the WMX series at the start of last season.

Although at that time the “new kid on the block”, Duncan stamped her authority and won five of the 14 races of the 2016 world series, more than any other individual last year and this was even after she had been able to start only nine of the races because of an injury, one that she was not in any way responsible for.

Duncan crashed on a jump while leading at the German GP in May last year, the third round of the 2016 series, after clipping an errant photographer who was standing out on the track. The wrist injury she suffered forced her out of the following five races as she underwent surgery and then took more time off to recover.

If she can avoid crashes and collisions, or dodge mechanical gremlins, and maintain her sizzling pace, there is no reason why Duncan can’t win in Loket this weekend, then go on to enhance her points with a solid performance at round five, the Dutch GP at Assen on September 10, and then claim the world crown when the 2017 season wraps up at the French GP at Villars sous Ecot on September 17.