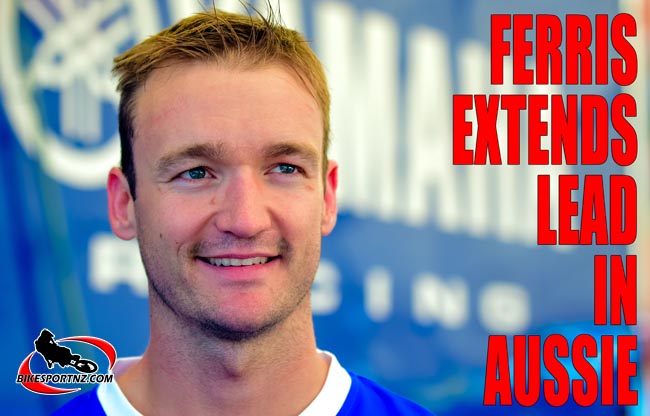 Kyogle’s Dean Ferris proved why he’s known world-wide as an Aussie looking to leave his mark on the sport, storming to 1-1 results at another action-packed sixth round of 10 in the Australian Motocross Championships at Nowra in New South Wales on Sunday.

The Thor MX1 class took to the Nowra circuit early in the day and, after 30 minutes on track for practice and qualifying, it was MEGA Bulk Fuels Monster Energy Kawasaki’s newest recruit Brett Metcalfe who was fastest with a 1:42.856 lap time. Second was CDR Yamaha’s Dean Ferris (1:42.959) followed by Crankt Protein Honda Racing’s Todd Waters in third (1:43.078). Fourth fastest on track was KTM Motocross Racing Team’s Kirk Gibbs, while Luke Clout was the fifth and final rider to progress through to GoPro Superpole.

When all riders had thrown down their individual hot laps, it was Honda mounted Waters who collected his second GoPro Superpole victory for the year and first pick of the grid, thanks to a lightning fast 1:42.718 lap time.

When the Thor MX1 class took to the line for their first moto of the day, the question everyone wanted to know the answer to was could anyone possibly beat Ferris.

When gates dropped, it was Ferris who took the holeshot, but it was the first turn pile up that captured the crowd’s attention, with more than ten riders getting caught up in Nowra’s tight conditions.

When the majority of riders resumed racing, it was once again Ferris who in familiar fashion began to check out. Behind him, Waters was in second position, while CDR Yamaha’s Dylan Long who was fresh back from injury, occupied third.

After three laps, Ferris had stretched out his lead to a healthy few seconds from Waters and Long, however the rider who was really capturing the crowd’s attention was privateer Zak Small, who was in fourth position and battling hard with 2015 MX1 champ Gibbs.

Surprisingly, despite being caught up in a first turn crash, both Metcalfe and Kade Mosig had made their way up to seventh and eighth after a handful of laps, where the pair began to battle for the positions in front of them.

Unfortunately for fastest qualifier Waters, a chain malfunction only five laps in saw a visibly dejected Honda rider headed back to the pits – leaving his factory Honda machine trackside. With Waters out and Ferris checked out, Long picked up a position and slotted in to second, while Gibbs also moved up a spot into third.

Behind Gibbs was Clout in fourth, while Metcalfe came together with Mosig in the fight for fifth, which saw Mosig go down, then forced to re-join the race in tenth position.

As moto one progressed, a mistake from Long saw him drop back to fifth, which allowed Gibbs to find himself in a familiar position – second behind Ferris. Metcalfe also capitalised on the mistake from Long, moving in to the final podium position with more than ten minutes left on the clock.

After ten laps, the running order saw Ferris continuing to lead from Metcalfe who had made the move on Gibbs for second, Clout made his way into fourth followed by fellow MX1 rookie and Kawasaki mounted Nathan Crawford in fifth. Long and KTM Motocross Racing Team’s Luke Styke occupied positions six and seven, while Wilson Coolair Motul Factory Suzuki’s Kyle Peters had fought his way back from dead last to eighth.

As moto one reached its closing stages, once again no one could get near Ferris, while behind him, the field had settled in to their respective positions, and the running order remained relatively unchanged.

So when the chequered flag flew it was no surprise to see Ferris cross the line victorious for the ninth time this season, second place was taken by Metcalfe on debut, while Gibbs wrapped up moto one in third. Fourth place was Clout, followed by MX1 rookie Crawford in fifth. Styke, Peters, Brodie Sims, Keiron Hall and Zac Small completed the top 10.

In race two it was MEGA Bulk Fuels Monster Energy Kawasaki’s Crawford who took the second Raceline holeshot of the day, followed by Clout, Metcalfe, Mosig and of course CDR Yamaha’s Ferris.

To the spectator’s delight, the top five riders then began an all out battle for the race lead, and before long, Metcalfe cracked under the pressure and ran off the track, while Ferris moved past Mosig where he then began to eye off the rear wheel of Clout.

After two laps, Clout and Ferris began to close in on race leader Crawford, but with a championship on his mind, it was Ferris who made the move on Crankt Protein Honda Racing Team’s Clout and moved in to second.

From there Ferris continued his charge towards the front, and by the time riders headed in to lap four, the CDR Yamaha rider had made the pass on Crawford and taken the race lead.

With Ferris out in front, Crawford and Clout began to battle for second, while behind the rookie pair, Metcalfe and Mosig were locked into their own battle for fourth.

With experience in their favour, both Metcalfe and Mosig began to close in on the youngsters by the 12-minute mark, but it was Metcalfe who managed to pull the move on his teammate Crawford and move into third position behind Ferris and Clout.

Notable absentees from the front of the field in moto two were Gibbs and Waters, who after six laps were back in sixth and seventh positions and with their work cut out for them, should they want to make it to the front.

By the hallway mark in moto two, Ferris continued to lead from Metcalfe and Mosig who had managed to make the move on Clout. Behind Clout in fifth was Crawford, while Gibbs and Waters continued to circulate in sixth and seventh positions.

As moto two reached it’s closing stages Ferris once again showcased his unmatchable speed, while the rest of the field settled in to their respective spots behind him.

By the time riders had received the last lap board, Ferris had followed his race plan to perfection – checking out on the field for the tenth time this season, allowing the bar to bar action to happen behind him.

So when the chequered flag flew for the final time at Nowra, it was Ferris who finished race two victorious, second place went to an ultra experienced Kawasaki mounted Metcalfe, while DPH Motorsport’s Mosig wrapped up race two in third. KTM’s Gibbs concluded the second race at Nowra in fourth after making the move Clout late in the moto, while Clout and Crawford finished in fifth and sixth places respectively. Waters, Styke, Peters and Hall completed the top ten in moto two.

But with 1,1 results it was Ferris who continued his incredible winning streak, taking his sixth round victory for 2017 at Nowra. Second spot on the podium went to MEGA Bulk Fuels Monster Energy Kawasaki’s Metcalfe, while KTM’s Gibbs completed the Thor MX1 podium.

“All the boys laid down a big challenge today – the first race was good but even in the second race I had my work cut out for me and even when I got into the lead Brett Metcalfe kept pushing,” Ferris explained.

“Overall, though, it was a good day – all of the guys at CDR Yamaha are putting in hours, and hours to make this happen.

“I love working with them and we’ll just continue to stay focussed and keep the ball rolling on to Shepparton.”