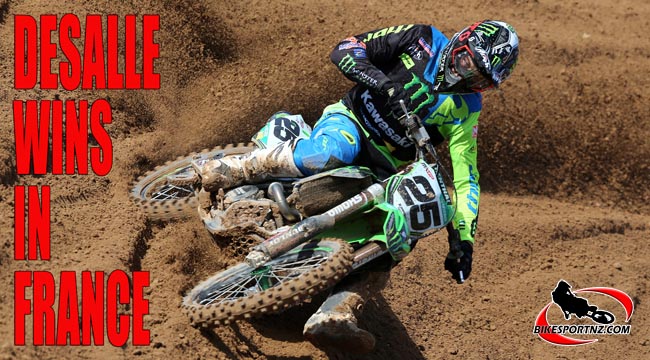 The beautiful Ernée circuit in north-western France hosted round nine of the Motocross World Championships at the weekend, Kawasaki’s Clement Desalle and KTM’s Pauls Jonass winning their respective MXGP and MX2 categories.

The weekend started well for Belgian Desalle as he took pole position, winning the qualifying session.

Desalle started Sunday looking to keep the momentum on his side but a 4th place in race one wasn’t what he was capable of or expecting. In race two, Desalle came out on a mission when he jumped past Red Bull KTM Factory Racing’s Antonio Cairoli for the lead on lap two and then led every lap to the finish winning his first race and overall of the year.

Desalle said: “It’s really nice to be back on the podium and it’s a good feeling to win a race after a while. I’m very satisfied about the job me and my team did in the last few weeks and we’ll keep working to be consistent for the rest of the season and enjoy riding”.

Cairoli, the current championship points leader, had somewhat of an off weekend where he struggled to pick lines and put in the laps he wanted.

In race one, Cairoli was third for 16 laps but he made it into second for the final two laps. Race two started with the holeshot but he was passed by both Desalle and Paulin, an uncommon occurrence.

Overall it was a positive weekend for Cairoli though with a 2-3 finish for a second overall, an extended points lead, and he surpassed a milestone of 8000 championship points throughout his career.

Cairoli said: “I don’t think of the championship so far as there are a lot of races to go but I got points this weekend which is a very positive thing. I’m very happy about the weekend, I had a very good start and I eventually found a good rhythm”.

Third overall but first in the French fans hearts was Rockstar Energy Husqvarna Factory Racing’s Gautier Paulin. Paulin admittedly struggled in yesterday’s qualifying race and in race one, where he finished 6th.

Paulin and his team made some adjustments between the races and found a noticeably improved setting. Paulin was fourth on the start of race two but methodically worked his way to challenge Desalle. Paulin finished 6-2 for 3rd overall. He said afterwards: “Fighting for the top today was great! The feeling on the bike was really good and I wish to thank my team for that. Thinking of the next race in Russia, I don’t know the track but I always try to do my best at every GP.”

Rockstar Energy Husqvarna Factory Racing’s Max Nagl had his first race win this season which was also his first top five of the season. The German has been making strides in his performances and today was rather impressive when he took the holeshot and led every lap to win Race one. In Race two he had another good start amongst the top 10 before moving up to sixth but he was then passed twice and later fell. Even with the fall Nagl had a stellar weekend and finished 4th overall.

Monster Energy Yamaha Factory MXGP’s Jeremy Van Horebeek fought hard through both races battling with various riders but most of all his team-mate Romain Febvre.

In race one Van Horebeek held second position for 16 laps but fell on the 17th and lost the position to Cairoli. In race two Febvre had the backing of the home GP fans, beating out Van Horebeek and with a strong end of Race he charged the Frenchman finishing 4th. The two Yamahas would go 5th and 6th overall with Van Horebeek ahead.

Another notable ride came from Red Bull KTM Factory Racing’s Jeffrey Herlings when he came from near last in Race 2. After a first turn crash Herlings was on fire before finishing 5th. The “Bullet” put in the fastest lap of the race on his charge through the pack and his salvaged 5-5 took 7th overall.

Red Bull KTM Factory Racing’s Pauls Jonass did what he has done now many times this season, win the MX2 overall and extend his points lead.

Jonass won Saturday’s Qualifying races and had a similar Race 1 by getting the lead and creating a gap early and then coasting to the finish.

Race 2 was a new challenge as Jonass had Benoit Paturel ahead of him and Jeremy Seewer providing pressure from behind. Jonass remained second and took home the overall with the 1-2 result.

In the press conference Jonass said: “To get the overall on the hard pack is a pretty good feeling, as you know last week it didn’t go so well in Germany. I made some improvements during the week and it paid off this weekend, I felt better on the bike and overall the feeling was much better than last weekend. It was a really good race and the whole time the French crowd cheering”.