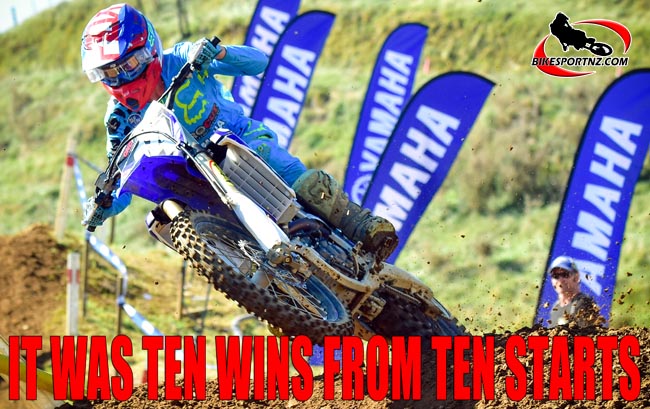 Bay of Plenty’s Maximus Purvis lived up to his name at the 2017 New Zealand Junior Motocross Championships in Taranaki at the weekend.

The results were truly maximum ones for the Yamaha hero from Mangakino as he topped both the premier categories at the two-day event, unbeaten in the glamour 14-16 years’ 250cc class and also in the eldest of the 125cc divisions, for riders aged 15-16 years.

The 16-year-old, now out of school and working as a digger driver, won 10 races from 10 starts over the weekend, the stand-out individual at the annual event this year. 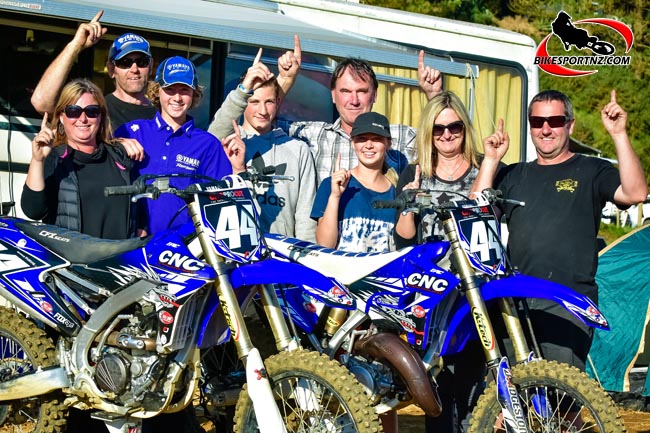 He had finished runner-up to Taupo’s Wyatt Chase (Yamaha) in the 15-16 years’ 125cc class at the corresponding event last season, but, with Chase soon after graduating to the senior ranks, the way was clear for Purvis to take charge.

His win in the 250cc class was perhaps the most impressive as he humbled Ohaupo’s defending champion Trent Collins in each of the races and snatched the title by a comprehensive 15 points from Collins.

In fact, so dominant was Purvis in both categories that he needed only to finish seventh or better in his final race in each class to claim the two titles.

Purvis will turn 17 in September and so, as the rules demand, he will move up to the senior ranks, although he has his eyes set on tackling the under-19 class in Australia in the coming weeks.

The Under-19 championship series has already begun in Australia and Purvis therefore will have no chance of winning it, but it will be ideal for him “just to dip toes in the water across the Tasman”.

Purvis had been keen to tackle the 125cc class in the senior motocross nationals in February and March, but a crash during training, just prior to the kick-off of that series, ruled him out.

“My fitness is great again and so riding two classes (at the junior nationals) wasn’t a problem for me,” said Purvis.

“I came here prepared for racing two bikes – the Yamaha YZ250F and the YZ125 – in the two classes and it all worked out for me in the end.”

His comeback from injury therefore could not have been more impressive, but, to add further element of grandeur to his performance is knowing that he had only collected his two bikes late last week.

Taking the stock standard bikes on a quick ride around a paddock near his home was all the preparation Purvis required.

The bikes were supplied by Pro Moto Yamaha in Taupo and, with massive support from sponsor Andy Ayre of CNC Pro Cut, Purvis’ parents, Jeremy and Denise, were able to step back and concentrate solely on providing encouragement and managing the campaign.