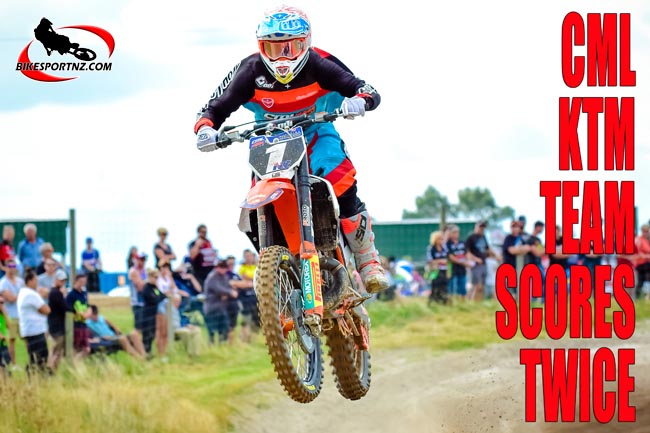 They work together, they ride together and now they’re champions together.

Takaka’s Hamish Harwood and Taihape’s Hayden Smith have plenty in common – their love of motocross racing, their KTM bikes decked out in identical CML Racing Team livery and their employment during the week, both working as apprentice builders and based in Takapuna.

And now the CML KTM team-mates can both add New Zealand motocross champion to their names.

Harwood arrived at Taupo for the fourth and final round of this season’s New Zealand Motocross Championships on Saturday with a comfortable 11-point advantage over his nearest rival for the MX2 (250cc) crown, Christchurch’s Dylan Walsh (Altherm JCR Yamaha YZ250F).

And, when the engines were finally shut off at the end of the day, Harwood was still on top, boosting his winning margin to 16 points and successfully defending his 2016 title in the process.

Harwood posted a 2-1-1 scorecard on Saturday and that was easily enough for him to retain his crown. 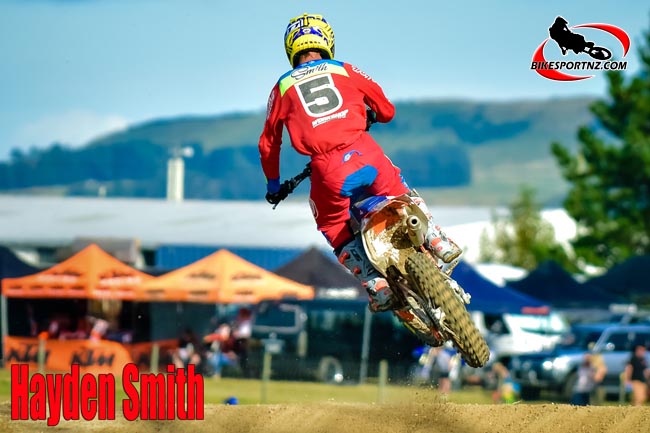 “I felt the pressure from some very talented riders who were trying to knock me off my perch, but I responded to that,” said the 21-year-old South Islander.

“I didn’t get a great start in race one today and wasn’t really in the groove. But I won the next two and that wrapped it up.

“I only really needed to finish second (to Walsh) in each race today to clinch the title, but, even knowing that, I wasn’t prepared to accept anything less than a win anyway.

“After being beaten by Dylan (Walsh) in race one, I felt it was really important for me to win race two to take the pressure off me for the final race.

“I wanted to have a safety margin in the points heading into the final race because anything can happen in this sport.”

He need not have worried because he comfortably won the final race to put the title beyond doubt.

It was a similar story for Smith, the 16-year-old former Wanganui Collegiate school pupil arriving at Taupo with an eight-point lead over his nearest challenger, Karaka’s Kurtis Lilly (HLR Husqvarna 125)

Smith didn’t win the day at Taupo – Lilly edging him out with a 2-1-3 scorecard – but Smith kept a cool head and did just what he needed to do to get the job done, posting a 3-2-2 scorecard and winning the title by five points.

Mangakino’s Maximus Purvis (Yamaha) was actually the day’s winner in the 125cc class at Taupo – finishing 1-3-1 in the three races – but this was also his only appearance in the series, because of an injury, and so he had no chance of winning the title.

“This is my first ever national motocross title,” said an elated Smith afterwards.

“I’ve been runner-up a couple of times in the junior ranks and was also No.2 in the minis before that, but now I’m No.1 and it feels great.”

It was a winner-takes-all final race and Smith knew he simply had to finish ahead of Lilly to wrap it all up.

“I was crazy nervous going into the final race. I got the holeshot and then let Max (Purvis) pass because I knew he wasn’t a threat for the title and I didn’t want to tangle with him.

“I could see that Kurtis (Lilly) was quite a way back and so, in the end, I didn’t have to take any risks and I could just cruise to the finish.”

Leading final overall standings after the fourth and final round of four in this season’s New Zealand Motocross Championships at Taupo on Saturday: