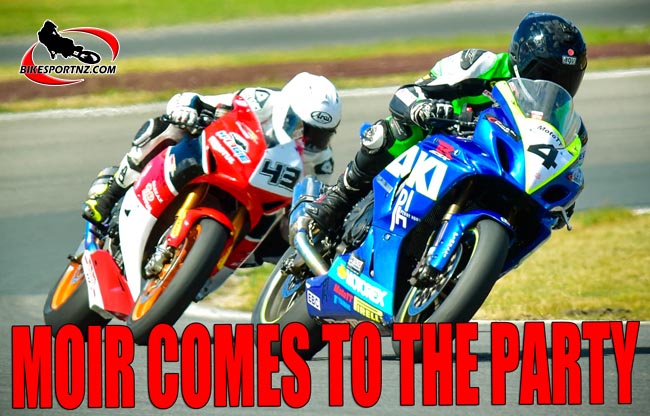 The titles of a couple of classic songs could be best used to describe what happened at round three of the New Zealand Superbike Championships in Taupo today.

The Beatles’ “With a little help from my friends” and Jimmy Barnes’ “Working class man” popped into the brain after Taupo’s Scotty Moir pulled off the ride of his career at the Bruce McLaren Motorsport Park, on the outskirts of his hometown.

In his first appearance in the four-round series, Moir proved to be something of a spoiler in the track today, finishing runner-up to defending champion Sloan Frost in the sole superbike class race of the day and, perhaps more significantly, pushing back to third and fourth respectively the two men who were ahead of Frost in the points standings, Christchurch’s Alastair Hoogenboezem and Whakatane’s Tony Rees.

Frost had started the day in third overall, but, his qualifying fastest (worth a bonus point) and then winning the race today, caused a massive points reshuffle, enabling Frost to halve his 26-point deficit to championship leader Rees and move past Hoogenboezem and into the No.2 spot on the table.

Rees still tops the championship standings, but Frost is now just 13 points adrift of him and, with two more superbike classes set for Sunday, anything is still possible in the campaigns of all these riders.

Moir, who works as a bike parts salesman during the week, was actually lucky just to finish his race today, let alone finish runner-up. A maintenance check-over of the bike afterwards revealed wiring very close to burning through and, even after just one more lap, he could possibly have gone from hero to zero with a non-finish.

“I’ve gone from third to second in the championship chase and I’m pretty happy with that,” said today’s race winner, Frost, afterwards.

“We were all pushing really hard today and the bike was twitchy on the hot track. Because it was so hot, the track became very greasy, but it was controllable.

“Our lap times were pretty respectable, considering the track conditions.

“The championship is a long way from over and there are still a lot of points to be won or lost.”

There was a similar fight-back in the 600cc supersport class where Rees’ youngest son, Damon Rees, nibbled into the championship lead enjoyed by Wainuiomata’s Shane Richardson.

Damon Rees qualified fastest and then led the sole 600cc race from start to finish from Richardson, with Rangiora’s Jake Lewis finishing third.

That enabled Damon Rees to shave six points off the advantage that Richardson had enjoyed at the start of the day.

“The racing was close but Shane and I have a good respect for one another,” said the 21-year-old Damon Rees.

“I know he’s not going to purposely hit me and I also knew I had better tyres than him for that race. I had chosen a harder compound tyre and knew it would still be good late in the race. The only way he was going to pass me was if I screwed up. Six points is a good claw-back, so the task ahead is not so daunting now.”

Plenty more shake-ups are on the cards with two more races for each of the various bike classes tomorrow.