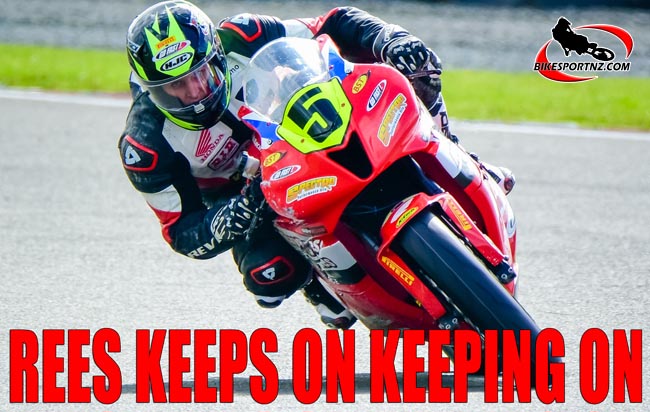 It has been quite a hot summer for Bay of Plenty’s Damon Rees and it’s only just got started.

Fresh from winning the 600cc class at the annual pre-nationals Suzuki Series, the 21-year-old Honda ace from Whakatane has now taken another scalp, this time winning his class at the opening round of the New Zealand Superbike Championships in Christchurch at the weekend, as well as clinching the 600cc New Zealand Grand Prix title and shattering the 600cc lap record.

Rees ended his weekend six points clear of arch rival Shane Richardson, a brilliant platform on which to build his campaign as the riders head to round two at Teretonga, near Invercargill, in just a week’s time.

Rangiora’s Jake Lewis, Christchurch’s James Hoogenboezem, Australian visitor Alex Phillips and Christchurch’s Cameron Hudson rounded out the top six in the 600cc supersport superbike class after a fierce two days of racing at Mike Pero Motorsport Park, on the outskirts of Christchurch, on Saturday and Sunday.

Rees qualified his Honda CBR600RR on pole at the Canterbury circuit, formerly known as Ruapuna, circulating in an impressive time of one minute 31.6 seconds, a time that would have been good enough to qualify him sixth fastest in the 1000cc superbike class.

However, Rees was forced to accept runner-up finish as his bike mysteriously lost power during the first of the weekend’s three 600cc races, although Rees still crossed the line just 4.5 seconds behind Wainuiomata man Richardson.

But it was all Rees the following day where he roared off to a pair of convincing victories – winning by margins of 5.7 and seven seconds respectively – the final race a gruelling 20-lapper and doubly significant because it was also recognised as the one-off GP title race.

Rees also set a new 600cc lap record for the track on Sunday, stopping the clock at one minute 31.09 seconds.

“It’s definitely a good start to my season,” said an elated Rees. “We’ve done a lot of hard work in the build-up to this season and now it’s paying off.

“I managed to get pole at Teretonga last season, so I think I’ve got a good chance of winning there next weekend too.”

Tony Rees had won the Formula One/Superbike class title at the pre-season Suzuki Series and it looks as though he and Frost have picked up again where they left off with that separate competition, although these two men are now joined by Hoogenboezem in making it a tight three-way scrap for top honours in the glamour class.

Frost qualified on pole and took the bonus point that went with that achievement, but then had to settle for a close runner-up to Rees in the first of the weekend’s three superbike class races, staged on Saturday.

However, a pair of wins the following day propelled Frost to the top of the standings.

The racing was extremely close and it’s possible a small blanket would have covered the leading three riders as they battled for glory in the final superbike class race of the weekend, the 20-lap affair that is also recognised as the one-off GP title race, Frost winning from Rees and Hoogenboezem.

“I saw I had a tiny gap where I didn’t have to cover my lines. Then I put the hammer down a little bit in the last four or five laps to give me the break I needed to relax at the end of the race,” said Frost afterwards.

“We were fairly strong from the practice. I wasn’t expecting the Honda boys to be as quick as they were but I knew they’d be there or thereabouts. It was really tough racing out there. Probably the hardest racing I’ve had to do.”

The riders now head to round two of the nationals at Teretonga, on the outskirts of Invercargill, next weekend (January 14-15).

After the Teretonga round, the riders head north for round three at Bruce McLaren Motorsport Park, Taupo, on February 25-26, and the finale at Hampton Downs, near Meremere, on March 4-5.