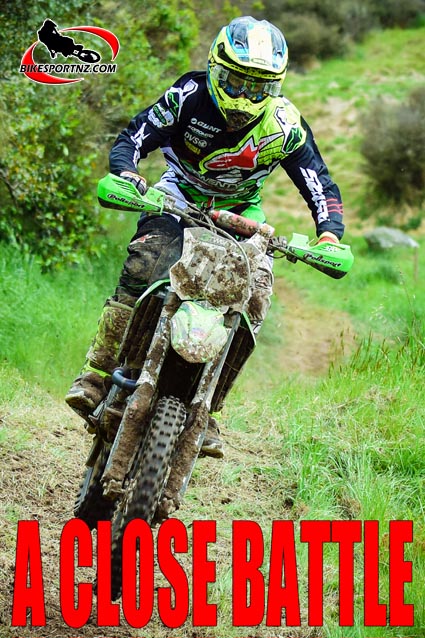 Look no further than Bay of Plenty motocross ace Rhys Carter and his Kawasaki KX450F.

Just a week after winning the motocross season-opening MX Fest at Taupo over Labour Weekend, the 27-year-old motocross coach was in top-grade action again, this time taking his 450cc motocross bike into a totally different environment, entered in the big annual Acerbis Four-Hour cross-country endurance race on Saturday.

And if anybody thought that Kawasaki didn’t have a bike suitable for the cross-country or enduro scene, then the performance of Carter and his Taupo team-mate Nick Saunders proved the doubters very wrong indeed.

The race was won again by Taupo’s national cross-country and enduro champion Brad Groombridge, although the Carter/Saunders pairing certainly kept him honest, crossing the line less than two minutes behind the now four-time four-hour champion.

Carter and Saunders tag-teamed one another on identical KX450F bikes for the duration of the seven-lap race and their runner-up finish was enough for them also to clinch the ‘big bore team’ class win.

With two-rider teams having to make a compulsory pit stop every lap to complete a rider change-over, it meant Carter and Saunders were slowed to walking pace along the 200-metre length of the pits, while the solo riders were able to speed at full-throttle through a short by-pass lane.

Carter and Saunders did, however, offer no excuses and gave credit to these “ironmen”, who raced the duration of the race on their own, without taking a break.

“Coming here and finishing second is pretty good. It’s just a pity I went down hard in the first corner. That certainly made life tricky for us,” said Carter. 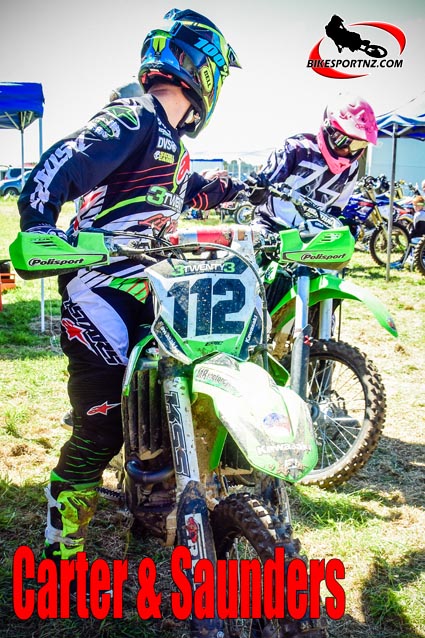 Despite the turn-one incident, Carter was soon on the charge and up to sixth by the end of the first 38-minute lap.

“An event like this is very different competition to pounding out 15-minute races on a motocross track,” Carter explained. “It’s good fitness training for me. I’d say my fitness is on the way up and I’ll be peaking by the time of the New Zealand Motocross Grand Prix at Woodville (at the end of January).”

Saunders, a 31-year-old Taupo car salesman, had been away from the sport for several years before re-entering the fray at the previous weekend’s MX Fest – where he managed to finish seventh overall in the premier MX1 class – but he showed he’d forgotten nothing and his lap times on Saturday were only slightly slower than those of team-mate Carter.

“I hadn’t really planned on doing any of this,” said Saunders afterwards.

“I’d been on a few trail rides with my buddies and it just escalated from there,” he laughed.

“I have not done much riding for the past two years but I guess the race-craft never disappears and I had forgotten how much I enjoy riding the bike. It was a lot of fun.”

He says, however, that he has no plans for continuing through the upcoming motocross season and will be “off to the beach for the summer” with his wife and two-year-old boy.

Carter, though, still has plenty of race action to look forward to, with the annual Whakatane Summercross coming up just after Christmas, followed by the Woodville GP and then the four-round motocross nationals, starting near Timaru in February.