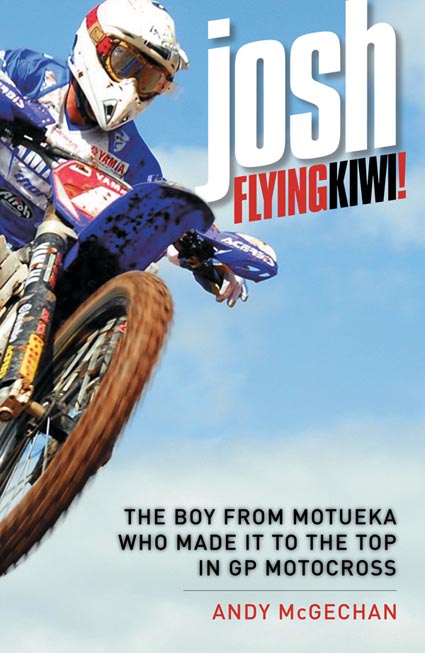 It was a little over four years ago, in August 2012, that Josh Coppins announced his retirement from top-level motocross, although that didn’t signal an end to his involvement in the sport.

The man from Motueka proudly flew the Kiwi flag overseas in a sparkling Grand Prix motocross career through the 90s and finally signed off his career by winning the Australian MX1 title in 2012 and he has since gone on to manage the successful Altherm JCR Yamaha racing Team in New Zealand.

Also a former Team New Zealand rider at the Motocross of Nations on 14 memorable occasions and acting once as the team’s manager, in Germany in 2013, perhaps this is an appropriate time to remind his fans about his biography.

Josh: Flying Kiwi! – written and illustrated by BikesportNZ.com correspondent Andy McGechan – went on sale worldwide in 2008 and has been a steady seller since then.

There wouldn’t be many Kiwi sportsmen who could pick a glossy magazine from the shelf of any bookstore in Western Europe and see his own face grinning back at him from the cover.

But, for nearly two decades, New Zealand’s Josh Coppins was one Kiwi who did fit that bill.

The man from Motueka was one of the fastest motocross riders on the planet. Runner-up in the 2002 and 2005 world championships, Coppins would have been the undisputed 2007 world champion if not for a disastrous accident.

Josh Coppins has come a long way since his world championship debut season in 1995. He steadily worked up through the world rankings to second place in 2002, riding for the Italian-based Vismara Honda team, but his recent career has been dogged by injury.

His 2003 season was almost over before it began after a supercross smash left him in hospital, written off by medical experts. He proved them wrong and was back on the podium by the end of the season, salvaging a world ranking of 12th. 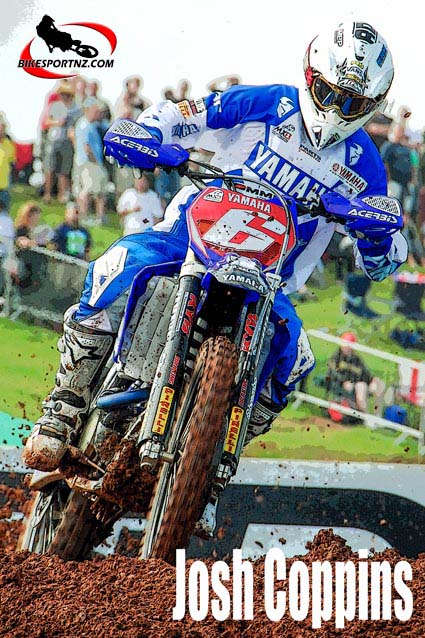 Racing a hefty 450cc four-stroke bike in MX1 for the first time in 2004, Coppins savoured his first GP win at the Isle of Wight in May, on his way to a world ranking of number three. A pre-season accident meant his 2006 season didn’t get off the ground until the year was halfway over, but he didn’t give up.

He showed the same determination towards the back end of the 2007 season, battling severe pain and a crippling injury whilst defending his dwindling lead in the world championship standings.

It’s been a roller-coaster ride to the top for Josh Coppins. His family made huge sacrifices financing his early years on the circuit and he’s fought off allegations of drugs cheating in a tough sport that is both physically and mentally demanding.

Coppins’ achievements over the years have been remarkable, all the more so because he comes from a country where motocross is very much a minority pursuit.

Josh: Flying Kiwi!, written by award-winning New Zealand journalist Andy McGechan and the first biography ever written about a Kiwi motocross rider, does just that.

A friend of Josh Coppins’ family, he has known Josh since his teens and had covered his rise to international stardom since the beginning. McGechan used to race motocross in his early twenties, competing at provincial and national levels.

Once a fulltime newspaper journalist, he now dedicates himself exclusively to the motorcycle industry, while continuing to write for magazines and newspapers nationwide. He is a frequent traveller and has photographed and written about his visits to world championship motocross events all around the world.