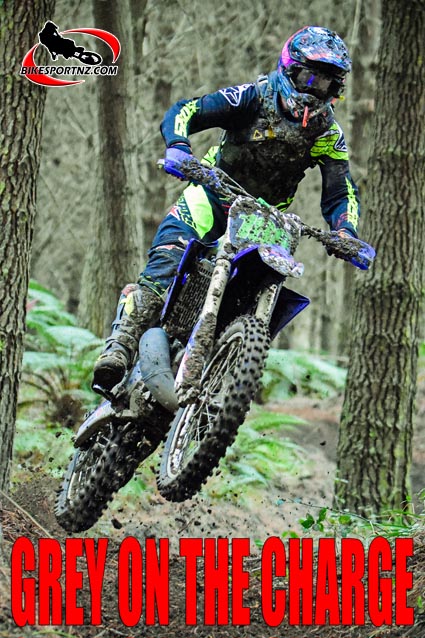 Cambridge’s Ashton Grey is starting to reap the rewards from his fitness work and the results are starting to flow for the teenager on the off-road motorcycle scene.

The 16-year-old St Peter’s Cambridge school pupil has been nothing short of sensational in recent weeks as he banishes the memories of his frustrating time on the sideline, recovering from a succession of shoulder injuries.

“I’m loving the two-stroke Yamaha YZ250X and, now that my fitness is improving, I’m starting to get good results,” he said.

“I picked up the bike about a year ago, but then I broke my collarbone three times in three months, doing stuff I shouldn’t have been doing, playing around on a mountain-bike,” he laughed.

“I’ve been riding since I was aged two, so that’s 14 years’ experience I have now, but it’s just lately that the results have really started happening.”

Grey rode the popular Desert Storm trail ride event near Taupo last Saturday, “as a warm-up” for the first round of the GNCC series near Matata the following day.

He finished fourth overall at Matata, that event co-sanctioned with the NZXC series and therefore counting also as the fourth round of six in that separate but parallel competition.

“That means I’m fourth overall (after one round) in the GNCC series and, in the NZXC series, I’ve now moved from seventh to fifth overall, and gone from third to second overall in the XC1 class (after four rounds, behind Taupo’s Nathan Tesselaar).”

With riders to drop their worst score in the NZXC series, the adjusted points tally would have Grey on top, two points ahead of Tesselaar, although there are still two tough events to come before any champagne corks can be popped.

Coatesville’s Sam Greenslade won the senior race at Matata, ahead of Howick’s Liam Draper, and he leads the NZXC series overall by 19 points from Sunday’s third-placed rider, Titirangi’s Callan May, while Tesselaar, Auckland’s Jake Wightman and Grey round out the top five in the series overall.

Round two of the GNCC series is set for Maddix Park, near Tauranga, on November 14, while round five of the NZXC is set to share the day with the Dead Toad cross-country race in the Riverhead Forest on November 20.

The next big event for Grey is this Labour Weekend’s inaugural Husqvarna Hard Enduro near Tokoroa.

“It’ll be the first time I’ve given something like this a go and I’ve entered myself in the gold grade too. So that will be a bit of an experiment for me. It will be interesting to see how I go against top guys like Liam Draper and Chris Birch.

“I owe a lot of my success to Wayne and Janice at Blackwood Yamaha in Cambridge. They’ve been great supporters … oh, and mum and dad too, of course.”