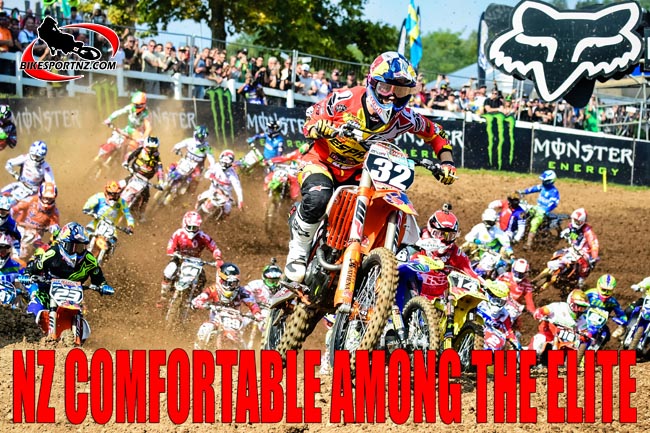 New Zealand has qualified 10th of the 38 countries entered in the Motocross of Nations in Maggiora, north-western Italy.

The qualifying process, on this first of two days of racing, is designed to whittle entries down to just 20 nations for the main points-scoring phase of the competition and the three New Zealand riders – Mount Maunganui’s Cody Cooper, Takaka’s Hamish Harwood and Hamilton’s Josiah Natzke – came through the rigors of the day with flying colours.

It is a solid start for the Kiwi trio racing at this 70th annual Motocross of Nations (MXoN) – often referred to as the “Olympic Games of motocross” – this year’s event on the steep and challenging track at Maggiora, near Milan, marking the 30th anniversary of the last time it was staged at the spectacular hillside venue.

Cooper was running ninth in his race when he was baulked by a lapped rider and got swallowed up by the two men immediately behind him and he was forced to settle for 12th.

Natzke (pictured in photo above, left, bike No.23, with Jorge Prado leading the way) was second into turn two in his MX2 class qualifying heat then battled hard to remain there, eventually slipping back to finish a remarkable sixth among some very elite GP regulars.

Harwood was involved in a pile-up coming out of turn one in his open class qualifier and re-started dead last. He battled on and managed to pass a couple of riders but, in pain with an injured shoulder, he finally decided to cruise and conserve energy for the main day of racing on Sunday.

With Harwood’s eventual 35th placing the result to be discarded by Team New Zealand, the Kiwis ended the qualification with 18 points, actually finishing ninth equal with Sweden but relegated by count-back to 10th.

The top 12 in qualification: