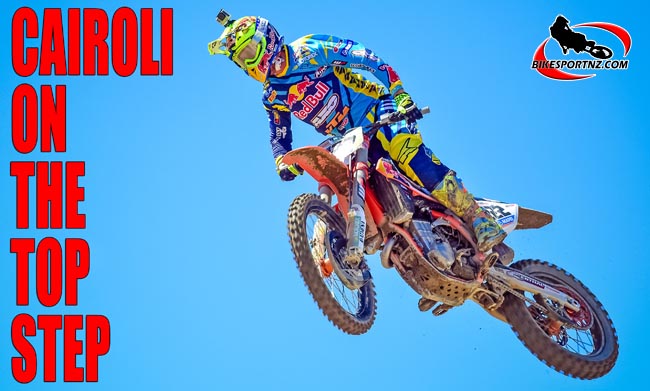 Italy’s Antonio Cairoli made his return to the top step of the podium at the 15th round of 18 in this year’s Motocross World Championships in Switzerland at the weekend.

Meanwhile Rockstar Energy Husqvarna Factory Racing’s Max Anstie poured more life into his MX2 campaign with a pair of race wins for the victory in MX2 and New Zealand’s Courtney Duncan took her Altherm JCR Yamaha to celebrate her return to racing from injury and dominate the women’s world championship’s sixth round of seven.

Another Kiwi rider in action, Hamilton’s Josiah Natzke (KTM), finished 2-3 in the European 250cc class races, his best result of the season, to finish the weekend overall runner-up.

Cairoli put in a breakout ride just when he needed it most, at least in race one, which was enough for his third GP win of the season.

The second race didn’t go as smooth for the Italian legend and he was absolutely livid at the end of it, which is a good indication he still has a fire in his belly for winning races. In his post race interview he mentioned that he is going to use the three-week break to test both bikes, the 350cc and the 450cc, which is a sure sign he is on a mission to find the extra edge.

Honda Gariboldi’s Gajser is not afraid to let it all hang loose, but riding like that almost always comes at a price. Gajser learned all about the risk and reward on his way to third overall for the day.

In race one, the risk slammed him to the ground, bent his bars and destroyed his front brake. A truly gritty ride saw him charge from outside of the top 20 to finish ninth. In race two, the risk rewarded him with his fifteenth race win of the season, which was enough to land him on podium for the 14th time this year.

At the moment, with the incredible depth of talent in the MXGP class, no one is good enough to get on the podium while holding something back.

Febvre knows better than anyone, and threw his heart on the table once again, as he always does, except this weekend the track demanded a lot of respect and anyone who pushed too hard paid the price. Febvre’s price was eighth place in race one, but he came back strong in race two with a second place for third overall.

If you thought Team HRC’s Gautier Paulin seemed out of character over the last couple of rounds, you’ll be pleased to know the real Paulin was back in the opening moto, with the assistance of a good start. A podium was on the cards for the Honda ace on Sunday, but because of his cruddy start in the final race, he fell short by three points and had to settle for fourth.

Meanwhile, Red Bull KTM Factory Racing’s Glenn Coldenhoff finally cracked the top five, in overall results, when he passed his team-mate, Cairoli, on the last lap in the second race. The pass saw him cross the line in third place, which is the first time he’s finished inside the top three this year.

It’s better late than never. Rockstar Energy Husqvarna Factory Racing’s Max Anstie looks as though he has finally got his stuff together. This weekend Anstie proved he’s got the skill set, fitness and mental edge to win races. He won race one with ease thanks to rival Jeremy Seewer’s bad start, but in race two, Seewer got off the line equally as good and made him work hard to get the job done. Despite being thrown in the pressure cooker, Anstie handled it and was able to stand on the top step of the podium for the second time in a row.

“That was one of the tightest races I’ve had,” he said, “it felt like the whole of Switzerland was behind Jeremy. Going through the waves I couldn’t even hear the bike.”

Team Suzuki World MX2’s Seewer set his home fans ablaze with his fine display of dirt bike racing at the weekend. The Swiss native dusted off the motocross playbook in race one when he found himself buried mid-pack at turn one.

If anyone said the track in Frauenfeld was difficult to pass on, then they need to go and get some tips on how to pass from the ‘91’, because he blitzed past a ton of guys on his way to second place in the opening moto.

A better start in race two saw the hometown hero blast to the front of the field. The crowd erupted like you wouldn’t believe, even Anstie felt as though all of Switzerland was here egging the Suzuki star on.

In the end, Max Anstie took the win after battling to the flag, but the down-to-earth kid from just up the road was still pretty satisfied with his 2-2 result for second overall.

“I’m so happy, I can’t find any words,” he said. “The spectators were so crazy and I am so happy to ride here at home in front of them. It’s an incredible feeling and I just can’t thank them and the people around me enough.”

Kemea Yamaha MX Official Team’s Benoit Paturel is MX2’s unsung hero. The French kid has been running a fever pitch pace all year although his results have been a little bit higgledy-piggledy despite his speed. Nevertheless, the Yamaha star on the rise has been constantly improving and authenticated his potential today with a 3-3 for third overall. He has also moved into third place in the championship standings.

Last but not least, the battle for fourth was tight between two unusual suspects. TM Factory Racing’s Samuele Bernardini and HSF Logistics Motorsports Calvin Vlaanderen were on fire at the weekend as they both charged into the top five. While we did say ‘unusual’, perhaps Bernardini doesn’t fall in that category as he has put in some blistering hot performances this year.

Anyway, the Italian youngster was fourth; while the South African rookie that rides with a Dutch license, Vlaanderen, scored his first ever top five finish, fifth.

The next round of the FIM Motocross World Championship will be at Assen, in The Netherlands, on August  28.