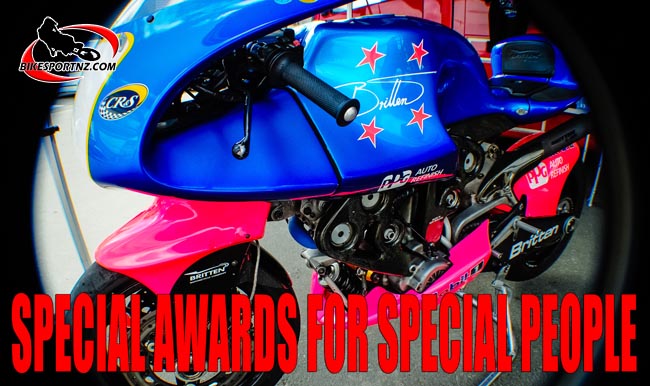 The governing body for motorcycling in New Zealand has been around for longer than any of its current living members and that meant there was plenty to celebrate at the annual conference and awards weekend.

Motorcycling New Zealand celebrated its 100th birthday in style in Wellington’s Te Papa Museum on Saturday night, the organisation using the occasion to announce its major award recipients for 2016, to recognise and honour special achievements by individuals and also to name the latest inductees into the Hall of Fame.

The centenary function heralded five new additions into the MNZ Hall of Fame and among them were inventor of the iconic Britten motorcycle, John Britten, and the man behind “The World’s Fastest Indian”, Burt Munro. Both men were honoured posthumously.

A man ahead of his time, John Britten was a mechanical engineer who designed a world-beating motorcycle with innovative features and materials, as distinctive for its streamlined shape and bold fluorescent colour scheme as much as for the records it broke and titles it won.

Britten worked on motorcycle design for some years, developing innovative methods using composite materials and performance engine designs. He created the Britten Motorcycle Company in 1992 to produce revolutionary machines to his own design made of light materials and using engines he built himself, which became world famous.

His Britten V1000 motorcycles won races and set numerous speed records on the international circuits, and it astounded the motorcycle world in 1991 when they finished a remarkable second and third against the factory machines in the Battle of the Twins at Daytona, in the United States.

Sadly, he was diagnosed with inoperable cancer and died on September 5, 1995, just over a month after his 45th birthday.

Only 10 of Britten’s famous bikes, plus one prototype, were ever built and one of these is on permanent display at the Te Papa Museum in Wellington.

This record still stands; Munro was 68 and was riding a 47-year-old machine when he set his last record.

Working from his home in Invercargill, he worked for 20 years to highly modify the 1920 Indian motorcycle that he had bought that same year.

Munro set his first New Zealand speed record in 1938 and later set seven more. He travelled to compete at the Bonneville Salt Flats, attempting to set world speed records. During his 10 visits to the salt flats, he set three speed records, one of which still stands.

His efforts, and success, are the basis of the motion picture The World’s Fastest Indian (2005), starring Anthony Hopkins, and an earlier 1971 short documentary film Burt Munro: Offerings to the God of Speed, directed by New Zealand’s Roger Donaldson.

A bike purported to be the original “Munro Special” is in Te Papa Museum.

Also honoured to be inducted into the Hall of Fame on Saturday night, named as ambassadors to NZ Motorcycle Sport or Industry, were Tokoroa’s Sean Clarke and Palmerston North’s Tim Gibbes, while Lower Hutt’s Paul Treacy was recognised for his contributions to motorcycle design and engineering.

The evening’s celebrations at Te Papa also focussed on the current crop of motorcycling super heroes.