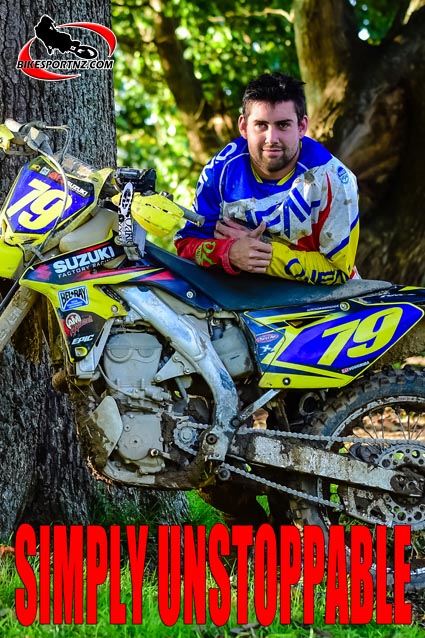 Bay of Plenty’s Brad Groombridge didn’t need to travel all the way down to Nelson at the weekend, but it was a challenge he had set for himself anyway.

Outright honours in the 2016 New Zealand Cross-country Championships had already been settled – Groombridge had been unbeaten at the first three rounds of the series and therefore he had clinched the title with a round to spare – and so there was absolutely no pressure on him as he unloaded his MC2 Suzuki Racing Team RM-Z450 bike at the fourth and final round near Nelson on Saturday.

It probably came as a surprise to nobody too when the 25-year-old Taupo locksmith won Saturday’s three-hour senior race at Nelson, completing the clean sweep of wins for the series.

With points from only three of the four rounds to be counted, as riders were to discard their one worst score, it meant Groombridge had already been declared champion several weeks earlier, but sill there was plenty to fight for with overall runner-up position to be determined, not to mention the various bike class results to be settled.

Howick’s Liam Draper finished runner-up on Saturday to clinch the No.2 position overall and also to claim the under-300cc four-stroke class honours, while Titirangi’s Callan May claimed third place at Nelson and took the No.3 spot overall, as well as clinching the over-200cc two-stroke class title.

While Groombridge dominated with his unbeaten run this season, Draper posted a 5-2-2-2 score-card for the series, while May had skipped round one, making that his “discard” result, and he had 3-3-3 results to count on.

“I had Liam (Draper) and Callan (May) in front of me for the first couple of laps on Saturday,” Groombridge explained.

“I eventually passed Callan when he pitted for fuel at the end of lap three. I had taken on fuel the previous lap, so I was able to bypass the pits and get the jump on him.

“Then I caught up to Liam and we left the pits almost side-by-side at the start of the final lap. It was good, close racing between us, but I got the job done and took the win.

“I was never forced to ride outside by comfort zone and quite happy to be among traffic over the first couple of laps. As I’ve gotten older I’ve come to learn that I didn’t need to be in front on lap one. It’s the final lap that counts,” he smiled.

“I am thrilled to be able to win my first national cross-country crown and now I’m hopefully looking for my second national title when the (parallel) New Zealand Enduro Championships come to an end next month.

“There are two more rounds to go, at Waimiha (on June 4) and at Tokoroa (on June 5) and there is virtually nothing between me and two other riders for the outright win.

“Enduro riding is very different from cross-country racing and it’s my first full season of doing the enduro champs, so I’m learning stuff all the time.

“I think the secret is just not to make mistakes.”