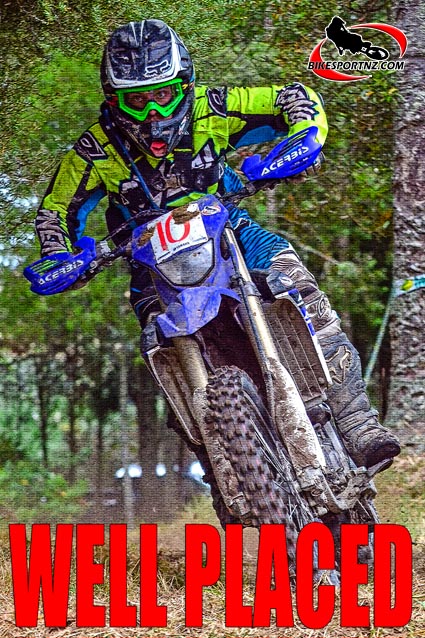 Two seasons of racing in the United States have served to sharpen and hone the dirt bike riding skills of Auckland’s Callan May.

And so the Yamaha ace from Titirangi is in a confident mood as he heads off to race at a steep and rocky round three of the New Zealand Enduro Championships near Porirua this weekend.

The five-round national series kicked off near Christchurch over the Easter Weekend with May bringing his Yamaha YZ250X across the line in fifth place overall. The second round followed just two days later, on Easter Monday, and this time May was credited with finishing fourth overall.

This puts him in a solid position near the top of the standings as he prepares for the first of three North Island rounds in the Akatarawa Forest, up the rugged Moonshine Valley, about halfway between Upper Hutt and Porirua, on Saturday.

Christchurch’s Hamish Macdonald and Taupo’s Brad Groombridge shared the wins at the two South Island rounds, with Howick’s Liam Draper finishing third overall at both events, but May too is in the hunt for the overall crown and also in line for the outright win in the battle for separate over-200cc two-stroke class honours.

“To be honest, I was not really happy with finishing fourth and fifth at the first two rounds,” said the 23-year-old May. “I always go out there to win, but there wasn’t much between the top five riders, perhaps 20 seconds in it at the end of the day, so the racing has been extremely tight and I like that.

“I’ve raced at Moonshine once before and it is not the sort of terrain I’ve been used to, more rocks and less sand than I’d like, but I have raced a lot of the time on rocks in American over the past two seasons, so I’m more used to it now and have the skills required.”

Others to watch out for this weekend include eight-time national moto trials champion Jake Whitaker, of Wainuiomata, former national enduro champion and multi-time former cross-country champion Adrian Smith, from Mokau, and expert over-300cc four-stroke class leader Chris Power, from Hamilton. Helensville’s Tom Buxton has been untouchable in the expert under-200cc two-stroke class, although rival Jake Wightman, from Auckland, will keep him honest.

Saturday’s event kicks off at about 10am, with classes to cater for expert and intermediate riders, as well as separate categories for veterans and women too.

Following racing this weekend, the national series continues with round four at Waimiha on June 4 and, finally, it all wraps up near Tokoroa on June 5.

May also finished third overall at round two of the New Zealand Cross-country Championships near Mosgiel last weekend. He wasn’t able to race at round one of that series but, with points from only three of the four rounds to be counted, he still has a good chance of winning.