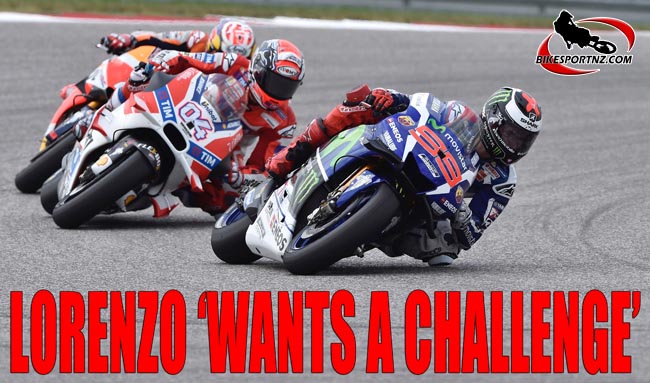 As if being 21 points off the championship leader wasn’t enough of a struggle to deal with, Spain’s Jorge Lorenzo said he ‘needed a new challenge’ as he explained his decision to join the Ducati brand at the end of this season.

The three-time premier MotoGP World Champion, currently with the Movistar Yamaha Team, has signed a two-year deal with Ducati for 2017 and 2018, but for now Lorenzo says he remains totally focused on trying to retain his crown as he prepares for the fourth round of the championship this weekend at Jerez in Spain.

“As you all know next season I won’t be with Yamaha. I felt I needed a change, a new challenge in my career, set new goals for me to try to achieve and keep my level of ambition at the maximum,” said Lorenzo, despite the fact he is currently 21 points behind championship leader Marc Marquez (Honda) and seemingly with an ample challenge already on his hands right now.

“I have only words of gratitude to the Yamaha family because of all the moments we lived through together. I achieved much more than I’d ever dreamt.

“What will happen in the future is unpredictable but from here on I just want to enjoy these 15 races that I have left with Yamaha to try to ratify the World Championship. This is right now my only target.”

Lorenzo began a four-race winning streak at Jerez last year to ignite his title challenge and boasts an excellent record at the Spanish circuit, where he won twice in the 250cc class in 2006 and 2007 before chalking up three MotoGP successes in 2010, 2011 and 2015.

“Jerez is one of my favourite circuits in the world because of the special lay-out of the track and the atmosphere and the people hugging us from the grandstands,” he said.

“Last season we kicked off with a good set of four victories in Jerez after a difficult start so hopefully this year we can repeat such a great result.”