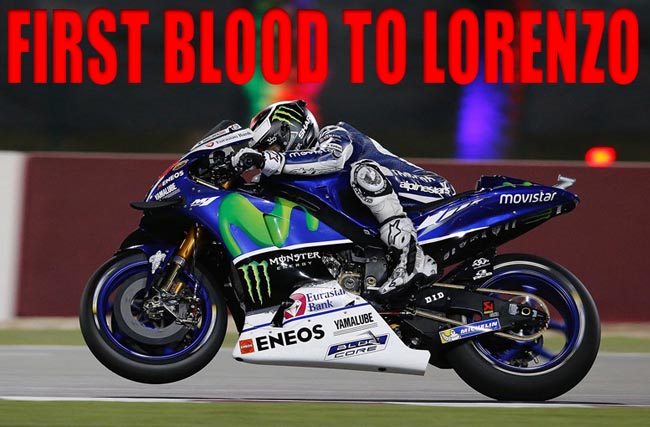 MotoGP World champion Jorge Lorenzo picked up where he left off in 2015 after the Movistar Yamaha rider rode a faultless race under the Losail floodlights in Qatar to begin title defence with a win this morning (NZ time).

The Spaniard made a flying start from pole to take the lead on the first lap but the Ducati pair of Andrea Iannone and Andrea Dovizioso used the huge top-speed advantage of their GP16 machines to breeze past the Spanish rider on the long start/finish straight at the end of the lap.

Iannone dramatically crashed out at turn 13 on lap six after leading in the early stages, leaving Dovizioso to take up the running from Lorenzo, Repsol Honda’s Marc Marquez and Valentino Rossi on the second factory Yamaha.

Lorenzo bided his time until 14 laps to go, passing the Ducati rider and gradually easing away at the front, stretching a lead of two seconds by the end of the 22-lap race as the three-time premier class champion produced his fastest laps on the M1 at the finish, reinforcing claims that the Michelin tyres would come on strong as the race wore on.

Marquez pounced for second place on lap 19 after a slight error by Dovizioso, but last year’s Qatar MotoGP winner used the speed of his Ducati to make a pass on the Honda rider into turn 1 at the start of the final lap as Rossi kept a watching brief in third.

Marquez inevitably launched one final attack at the last corner but ran wide, allowing Dovi to nip underneath him as he claimed the runner-up spot to give Ducati some consolation after Iannone’s unfortunate demise.

Behind Rossi in fourth, Dani Pedrosa was a distant fifth, while Suzuki’s Maverick Vinales was sixth after fluffing his start from the start row on the GSX-RR, which left him in seventh on the opening lap.

Britain’s Cal Crutchlow was a faller on the LCR Honda after coming off at turn 4 on lap seven while holding seventh place.

KTM-bound Bradley Smith was the top British rider in eighth on the Monster Yamaha Tech 3 M1, while Scott Redding finished 10th on the Octo Pramac Ducati.

Ireland’s Eugene Laverty was an impressive 12th on the Aspar Ducati GP14.2.

As the lights went out to signal the start of the first race of the new 2016 championship, Lorenzo – who made a late decision to switch from the medium rear to the soft – made his pole position count to surge into the lead. In contrast Suzuki young gun Vinales went backwards from third place.

Vinales, so impressive throughout pre-season testing and free practice and qualifying in Qatar, left himself with a mountain to climb as he found himself down in seventh place.

Iannone and Dovizioso blasted past Lorenzo on the straight at the end of lap one, with Rossi holding fourth from Marquez and Pedrosa.

On lap three, Marquez picked up a place with a pass on Rossi at turn 6 as the top five began to make a break on Pedrosa and Vinales in sixth and seventh respectively.

There was little change in the order until lap six, when Dovizioso swooped into the lead at turn 1, albeit only fleetingly as Iannone immediately responded to nose ahead once more.

Undeterred, Dovizioso went past his team-mate again at turn 5 as the pair traded places, only for Iannone’s race to end abruptly when he seemed the lose the front of his GP16 without warning at turn 13.

There was more drama when Cal Crutchlow, who had made good headway to progress to seventh place on the LCR Honda, went down at turn 4.

Lorenzo was looking menacing in his newly inherited second place and sure enough, the Mallorcan made what proved to be a race-winning pass on Dovizioso at turn 4 on lap nine.

He managed to gain enough of an advantage during the remainder of the lap to hold his place on the main straight, denying Dovizioso the chance to use the superior speed of his Ducati to draft past.

Lorenzo was unable to disappear into the distance as he did so many times in similar circumstances last year, but gradually as the race wore on he became stronger and eventually put some distance between himself and the chasing pack of Dovizioso, Marquez and Rossi.

With four laps to go, he held a lead of 0.8 seconds and a record lap of 1m 54.9s on lap 21 was eight tenths faster than his closest challengers, putting the race to bed as Dovizioso and Marquez disputed second.

Italian star Rossi threatened to become involved in the scrap for the runner-up spot without really managing to get close enough to attempt a pass.

Unsurprisingly, Marquez was never going to settle for the final place on the rostrum and shot into second place at turn 10 with four laps to go.

Dovi, though, was equally determined and passed Marquez into turn one after powering past on the straight.

Marquez made one final lunge at the last turn on the final lap but his effort was in vain as he ran wide and the Honda rider had to settle for third in the end.

Rossi was only one tenth behind Marquez as the 37-year-old finished fourth, although Honda’s Dani Pedrosa was 14 seconds behind the Lorenzo at the finish as he took fifth from Vinales.

Pol Espargaro was three seconds back in seventh, only just holding off his Monster Yamaha Tech 3 team-mate Bradley Smith on the dash to the line.

Stefan Bradl (Aprilia) and Avintia’s Loris Baz were among the fallers, while Yonny Hernandez was an early retirement on the Aspar Ducati.