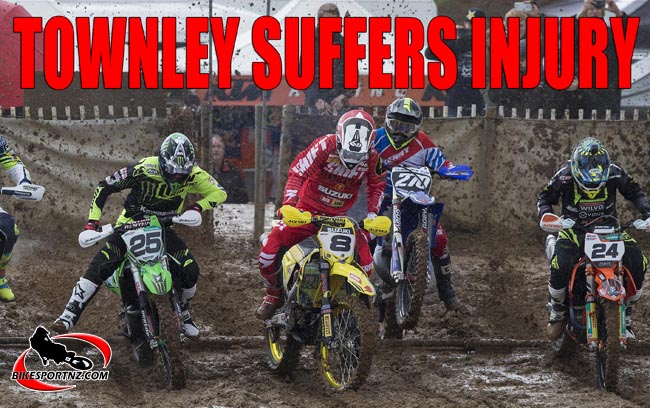 After a solid ride in Hawkstone Park last weekend and again in the opening two MX1 motos in France, the former world MX2 champion crashed after a collision with Dutch KTM rider Jeffrey Herlings in the superfinal.

Townley had a good start in the Super Final, battling with British KTM rider Shaun Simpson for first place. Then Herlings made a block pass which resulted in Townley crashing and having to pull-out.

Townley had this to say:

“Coming back to Europe is not easy and the conditions are tough,” Townley said. “It has been quite a challenge each weekend but I’m improving every race. I started quite slow, I couldn’t follow the fast guys in Moto 1, but I got more used to the track in Moto 2 and could stay with them for some laps.”

Team Manager Everts was not happy with the incident.

“The pass on BT by Herlings was unnecessarily aggressive. It’s a pity to see that things like that happen as BT hurt his knee. There are already so many injured riders and the season hasn’t even started yet. A little respect between riders is not misplaced. At the moment, we do not know how serious it is for Ben, but we will wait and hope for the best,” Everts added.