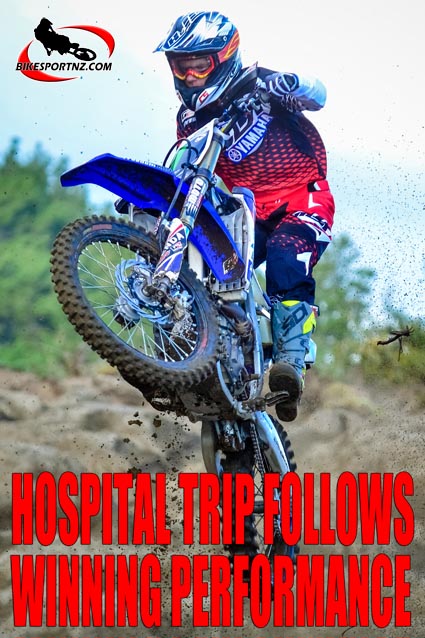 Taikorea’s Paul Whibley is already part of the way down the track towards claiming yet another domestic title after winning a race at the weekend, remarkably an event that he probably should not even have been at.

The 37-year-old Yamaha ace was convincing winner of the first of four rounds of the New Zealand GNCC (Grand National Cross-country Championships) at Matata, in the Bay of Plenty, on Saturday, leading Morrinsville rider Simon Lansdaal and Rotorua’s Scott Birch across the finish line.

But Whibley’s win was perhaps an even more impressive victory, certainly a tougher one than the five-minute winning margin would indicate, with the dirt bike hard-man loading up his bike immediately after the race and then driving himself directly to hospital.

“I had been feeling a little unwell during my drive to Matata. I just thought it had been something I’d eaten. I took some pain killers and thought I’d be okay,” said Whibley, who was more than “okay” in beating more than 150 other riders to win the arduous six-lap and nearly three-hour race.

“When I was leaving the track, I phoned up my wife (Katherine), who is a nurse, and told her about my stomach pain and she said it could be my appendix. Sure enough, that’s what it was. I was admitted at A&E and had surgery the next morning.”

They don’t come much tougher than Whibley.

The former Manawatu forestry worker, affectionately dubbed “The Axeman” on the motorcycling scene, spent 12 years racing overseas and won major titles in the United States in 2009 and 2012, but he signed off on the international phase of his career at the end of last year and packed up and headed back home with the focus on collecting a few Kiwi titles before he finally hangs up his helmet and boots for the last time.

He won the New Zealand Cross-country Championships when that four-round series wrapped up back in May and then last month he captured the Dirt Guide Series crown with a round to spare.

Now his focus is on winning the GNCC series, as well as running the competition that is his own creation, the inaugural NZXC Series, and round two of the GNCC, set for Maddix Park in Tauranga on November 14, will be twice as significant because it doubles also as the fourth round of five in the parallel NZXC series.

“I didn’t create the NZXC series to be something for me to win personally, and I’ve already sat out of one of the rounds in the NZXC anyway, pretty much preventing me from winning that, but I’d certainly be keen to win the GNCC series,” he said.

Unfortunately, it will depend on the speed of his recovery from surgery as to whether he will be on the start line in Tauranga next month.

“I may be out of action for up to six weeks,” he said.