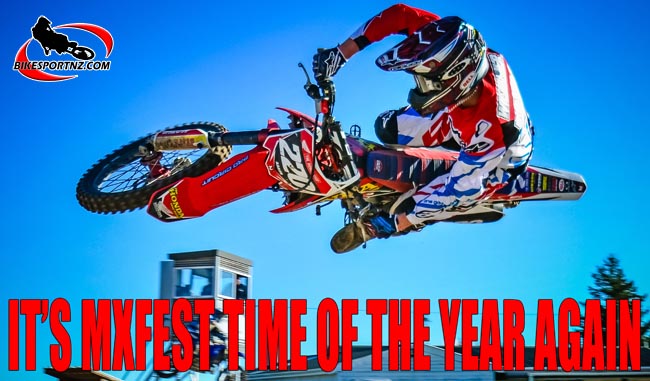 All roads lead to the Bay of Plenty this weekend as the 2015-16 New Zealand motocross season kicks into life, with a ‘tree-huggers versus show-ponies’ element just to make things more interesting.

The big annual Labour Weekend MX Fest at Taupo has again attracted all the nation’s major riders and race teams, the popularity of the two-day spectacular at the Digger McEwen Motorcycle Park, on the outskirts of the Central Plateau tourist town, ensuring there won’t be a motel bed to spare in the region over the coming days.

With new 2016 model bikes to be tuned and set-up for the upcoming nationals, muscles to be flexed, fresh team line-ups and allegiances to be shaped and a long weekend in which to do it, the MX Fest heralds the start of what could be another cracking motocross season.

World, national and provincial titles count for nothing, international credentials are likely to be challenged and past loyalties go out the window as the new season brings forward fresh and exciting match-ups at this Huka Honda-sponsored event on October 24-25, with riders such as Te Puke’s Logan Blackburn, Rotorua’s Scotty Canham, Reporoa’s Hadleigh Knight and Onewhero’s Jayden Turnwald, for example, all now sporting different colours.

In addition, Australian hero Dean Porter travels from his base in Perth to race a Husqvarna in the MX1 class this weekend.

Now in its 30th year, the event is expected to attract riders in their hundreds and spectators in their thousands, with the race programme, as usual, featuring the mini riders – the weekend’s racing incorporating the North Island Mini Motocross Championships – junior and women riders on Saturday and senior and veteran racers on Sunday, albeit with a new twist that should appeal also to riders from a parallel motorcycling code, the enduro fraternity.

A series of enduro-cross elimination races will pit the cream of motocross against the elite of enduro, with a 12-rider motocross-versus-enduro final set for Sunday afternoon.

“It is part of the Taupo Motorcycle Club’s new initiative to make the venue more all-encompassing of the various disciplines,” said club spokesman Bevan Weal.

“It will be good to see the tree-huggers (enduro riders) up against the show ponies (motocross riders),” he laughed.

“This weekend is traditionally the first big hit-out for the major motocross teams, so it’s going to be pretty full-on.”