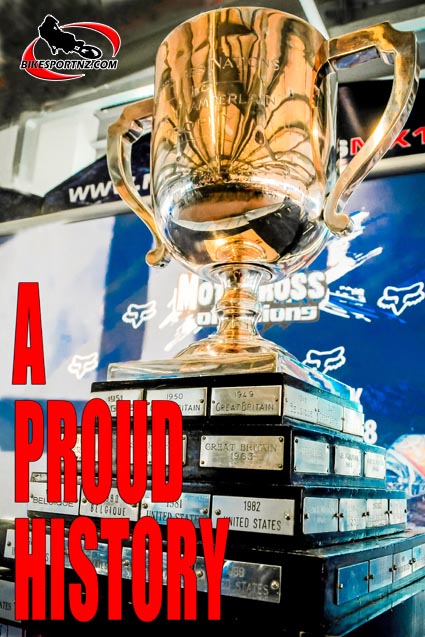 The Motocross of Nations has come a long way since the sport’s humble beginnings back in the 1920s.

Motocross was known as “scrambles” when it was invented in the 1920s and the sport developed quickly throughout the 1930s.

After the war, the FIM elevated this sport at international level by giving birth to the Motocross des Nations (official title in French, run with 500cc motorcycles only), a classic event which has been run annually ever since.

The inaugural event was held near The Hague, in the Netherlands, on 20 July, 1947. Three nations were invited – the Netherlands, Belgium and Great Britain. The Belgian rider Auguste Mingels was the fastest, but the Great Britain “A” team, with Bill Nicholson (BSA), Fred Rist (BSA) and Bob Ray (Ariel), won the first team title, ahead of the Belgian “B” squad.

The second “Nations” contest took place in August 1948 in La Fraineuse, close to the Belgian city of Spa. National federations of France, Sweden and Luxembourg were also invited for an event dominated by the local team. Nic Jansen, Marcel Cox and Andre Milhoux took first, second and fifth places, clinching the first Trophy for Belgium.

At the end of August 1949 it was the turn of Great Britain to host the final competition of the decade at Brands Hatch. Great Britain won the competition for the second time, thus keeping the Cup indefinitely.

The ACU then donated another Cup for the competition’s winning team. The vice-president of the FIM International Sporting Commission Peter Chamberlain had always been a strong supporter of Motocross, and worked a great deal on behalf of the national teams’ competition. After he passed away in 1954, the cup was officially named after him.

In the 50s, the British dominance was quite strong: Seven victories out of 10 in the Motocross des Nations before 1960. The only exceptions were the victories of Belgium in 1951 and Sweden in 1955 and 1958.

A competition for 250cc machines, named the Trophée des Nations, was created by the FIM as from the 1961 season.

Victories in the first years were clinched by the Swedes after two initial successes for Great Britain. In the 500cc team event Great Britain lost against Sweden in 1961/62, but then won five years in a row, reaching the number of 14 victories in 20 years, however their last win was in 1967 and it would take 27 years before they won again.

In Kishinev – then in the Soviet Union – the Russian team took the Chamberlain Trophy for the first time. Then Belgium finally won again the Trophy in Farleigh Castle (1969) after chasing after it for 18 years, with legendary names such as Roger de Coster, Joel Robert and Sylvain Geboers.

The 70s saw a big change at the mechanical level, with the massive arrival of Japanese manufacturers. Suzuki started first, quickly followed by Yamaha, Honda and Kawasaki. The first years of the decade were shared between Sweden and Belgium.

In Sweden 1974, behind the local team, a US team appeared for the first time on the rostrum, in the second place, composed of Jim Pomeroy (Bultaco), Brad Lackey (Husqvarna), Marty Tripes (Husqvarna) and Jimmy Weinert (Kawasaki), just ahead of the Russian squad including 250cc World Champion Guennady Moisseev.

In 1975 in Czechoslovakia, the local team finished ahead of Belgium – despite the presence of three World Champions, Roger de Coster, Harry Everts and Gaston Rahier – and Great Britain. Two wins of the Belgian team preceded the second victory of a Russian team, still with Guennady Moisseev.

In the Trophée des Nations contest, Belgium conquered all titles except one (Russia in 1979) as of 1969 until 1980. In the Motocross des Nations Belgium again won two titles (79, 80) before the American domination became effective. 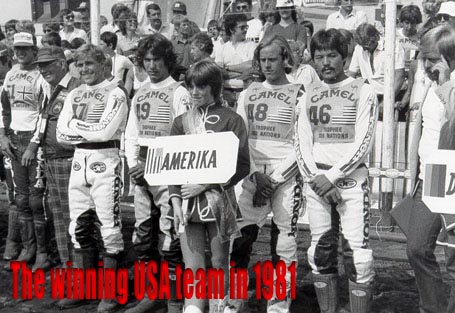 Having missed both events in the two previous years, the American team arrived at Lommel in Belgium in September 1981 for the Trophée des Nations with four Honda riders managed by former World Champion Roger de Coster. Danny Laporte, Chuck Sun, Johnny O’Mara and Donnie Hansen destroyed the opposition, and one week later won again in the Motocross des Nations in Bielstein, Germany. Changes were made in the team from one year to the next, but it did not change anything. The American field was full of top riders during the 80s, and De Coster’s team got eight victories (four in each team competition) in four years.

In 1980 the FIM decided to introduce a third Motocross team contest with 125cc motorcycles: The Coupe des Nations. The Italian team led by Michele Rinaldi won the first two titles, followed by Belgium (with Eric Geboers) and the Netherlands (with Kees Van der Ven and John Van de Berk).

Nothing could stop the Americans though – this would only happen in 1994, after 17 consecutive victories (13 in the Motocross des Nations, and the last four of the Trophée des Nations), against … Great Britain, in Roggenburg, Switzerland. 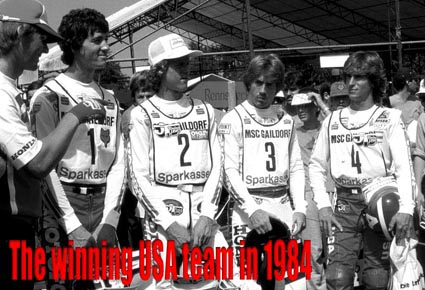 Their teams always integrated world-recognised top riders. Danny “Magoo” Chandler won all four heats in the team contests in 1982, but perhaps the greatest win of all came at Maggiora in 1986 when America’s trio of David Bailey, Ricky Johnson and Johnny O’Mara went through all three heats unbeaten by the rest of the world.

After Great Britain’s win in 1994, it was the turn of Belgium to be back at the top of the competition in 1995 with Stefan Everts, Joel Smets and Marnicq Bervoets. But the Americans were still there. In ‘96 in Jerez, the team driven by multi-champion Jeremy McGrath beat the French and Belgian teams.

Then, the US team would be off the rostrum for three consecutive years, which saw two Belgian wins and the first crown for Italy (with World Champions Andrea Bartolini and Alessio Chiodi, and also Claudio Federici), in 1999 in Brazil, ahead of France and Belgium. Once again the Americans were back in 2000 in St Jean d’Angély, led by their new top rider Ricky Carmichael.

In Namur 2001, it was finally the turn of the French team to clinch their first victory (with David Vuillemin, Yves Demaria and Luigi Séguy), beating the Belgians on their home track.

Italy won a perturbed 2002 edition, and Belgium – still with the record holder in individual World titles Stefan Everts – won the contest in 2003 and 2004, before the US bounced back to win the next seven editions in a row, James Stewart having replaced Carmichael as the team’s top rider in 2006.

And 2006 was the year that the Americans didn’t win a single race but they won the MXoN nonetheless, with Belgium finishing runners-up and New Zealand third. 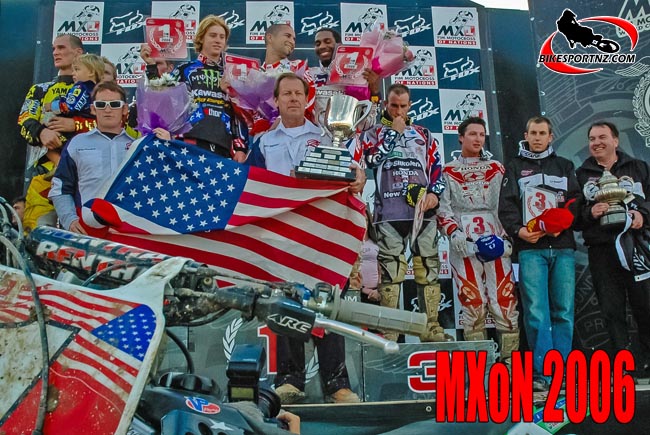 Carmichael was back in 2007, celebrating his last motocross appearance at Budd’s Creek in the US, while Stewart was part of the 2008 winning team, the event on the infield at Donington Park. American MX2 class rider Ryan Villopoto stunned everybody when he won both his MX3/MX2 and MX1/MX2 races in 2007.

In 2009 the event came back to Italy after an absence of 23 years, this time in Franciacorta. The American Team got the Trophy again but failed in repeating their countrymen’s performance in 1986 at Maggiora.

The trio made up of Ryan Dungey, Jake Weimer and Ivan Tedesco struggled against nations such as France, Belgium and Italy. Eventually USA won from France and Belgium, while a crash by Italy’s top rider and multiple World Champion Antonio Cairoli in heat three ended the team’s victory ambitions.

In 2010 the FIM Motocross of Nations was back in the USA and home riders obtained their 21st Chamberlain Trophy in Lakewood, Denver, thanks to the performance of Ryan Dungey, Trey Canard and Andrew Short. The German team, which was leading the standings after race two thanks to the superb racing of youngster Ken Roczen and Max Nagl, were finally third, followed by the Belgian team. 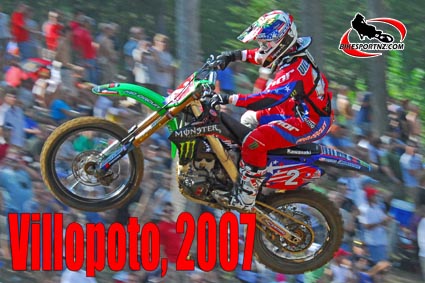 New Zealand’s Ben Townley won the MX2/Open Class race at that MXoN in Denver, but, unfortunately the Kiwis ended up only eighth overall.

In 2011, at St Jean d’Angely in France, there were three different moto winners – Gautier Paulin, Chad Reed and Ryan Villopoto – but the USA won it overall. New Zealand sent a “development” team, ended up in the B final and finished a sad 30th out of the 33 countries entered.

In 2012, at Lommel in Belgium, Italy’s Cairoli (who finished 1-1) and Dutch rider Jeffrey Herlings (with his 2-1 score card) gave a lesson in sand riding. Germany won overall and Team US was humbled to finish third overall, behind the host Belgians. New Zealand managed 15th.

The MXoN in 2013 was staged at Teutschenthal, in eastern Germany, and once again Italian MX1 class rider Cairoli dominated, winning his two races, while Germany’s Roczen won the MX2/Open Class race.

Belgium won the event overall, ahead of the United States and Italy. New Zealand finished 20th.

France won the 2014 event overall, ahead of Belgium and the United States.

Through the years this event – whose English name is the Motocross of Nations, officially adopted in 2003 – has become well regarded as the peak of the FIM Motocross World Championship season.

The 2015 Monster Energy FIM Motocross of Nations is in France this weekend and perhaps we’ll see some more historic happenings.