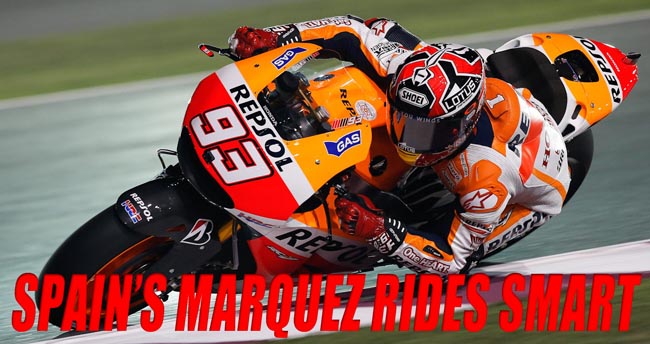 Italy’s Valentino Rossi didn’t know whether to shed tears of joy or sadness after finishing fifth in front of a sell-out crowd of more than 92,000 fans in his home Misano GP race, the 12th round of 18 in the MotoGP season.

The race was won by Repsol Honda’s defending world champion Marc Marquez, who judged perfectly when to switch bikes as the weather went from dry to wet and then to dry again.

While Movistar Yamaha’s Rossi, who was the championship leader when he arrived at the track, saw a near one-year podium run come to an end, he crucially almost doubled his world championship lead over team-mate Jorge Lorenzo.

Spain’s Marquez remains third in the standings after a DNF following a crash at an earlier round cost him greatly in the chase for points.

Pressure had been building on Rossi and Lorenzo, who had finished all 12 races – and were separated by just twelve points – heading into Misano, just 20-minutes’ drive from Rossi’s home town.

But after a dry and sunny weekend, on-off showers in the race tested tactics, judgement and riding skills to the limit. Both title leaders lost out relative to their pure dry pace, but it was Lorenzo who paid the highest price. The Spaniard was thrown off in a fast accident shortly after pitting for his dry bike, as he pushed to re-pass Rossi while the Italian made his own second stop.

“Different thinking [about today’s result],” began Rossi, speaking in the Movistar Yamaha hospitality as rain continued to fall. “I mean it is a shame for the race, especially at Misano. It was important to try to arrive on the podium, but after a very good weekend always with sun, today the conditions were very, very difficult.”

The qualifying order of Lorenzo-Marquez-Rossi had been repeated during the dry early stages of the race, before the shock rain shower forced riders to pit for their wet weather bikes.

Rossi initially struggled to match the pace of Lorenzo and Marquez, before recovering almost four-seconds to pass the duo with 12 laps to go. Had the rain continued, Rossi may well have repeated his wet Silverstone victory and claimed his first back-to-back wins since 2009.

“The first two-thirds of the race were good because I was not so bad on the dry at the beginning and after we changed the bike for the first time, to rain tyres, was also a good part of the race because I was very strong and very fast,” he said. “I also enjoyed fighting with Jorge and Marc, and I was in front.”

The race took another twist as the rain cleared, sending those lower down the order straight back into the pits for slicks. The leaders always have more to lose by gambling on an early stop but when third place Marquez pulled in with 10 laps to go, only Rossi and Lorenzo were left on badly worn wets.

“After it began drying and we had to change the bike again,” Rossi confirmed. “It was a difficult decision. For sure for me and Jorge fighting for the championship it is more tricky, more difficult, to try to take the right decision without risking too much.

“I know that if you pit earlier it is better for the result, but more risky. Two laps before I wanted to stop but it was still raining a little bit on the back straight and I thought if I stop and it starts to rain more, for me the result would be very bad. Also I check a little bit and Jorge was still behind me, so I decide to continue. I stayed out a little bit too much and I lost time during the next two laps.”

The writing was on the wall for the race leaders when eventual winner Marquez began lapping ten-seconds quicker than the Yamahas. Lorenzo duly pitted next time around, but Rossi stayed out for yet another lap, leaving him in danger of being overtaken by Lorenzo.

However the Spaniard promptly crashed out, leaving Rossi to slot into a safe fifth after re-joining from the pits. The man they call ‘The Doctor’ has now increased his title lead from 12 to 23 points.

“I changed to slicks again and at the end I finished fifth. I wanna cry for sure! I hoped for a better result, also because I have a good potential in the dry and the wet,” Rossi said.

“I don’t think I could have won, because to win today you have to have your mind free from the championship and take risks, especially with slicks on a drying track. Maybe I could have arrived on the podium or in front of (French rider) Loris Baz. So third or fourth instead of fifth.

“The people who finished in front of me had nothing to lose. Marc was very fast and did the change at the right moment, but for example Smith – who finished second – didn’t change tyres. It was a big, big, big gamble! If it continued to rain he’d have been t12th and I cannot do that.

“Also with (Britain’s Scott) Redding, he crashed and for that reason he changed to slicks. He made the right decision but it came after a mistake.

“But from the other side, with the crash of Jorge, I extend my lead by eleven points and this is the most important thing. For sure in Misano, in front of all these people and this special atmosphere, arriving on the podium was the target but for the championship it is a great and important result.”

MotoGP championship standings after round 13 of 18: