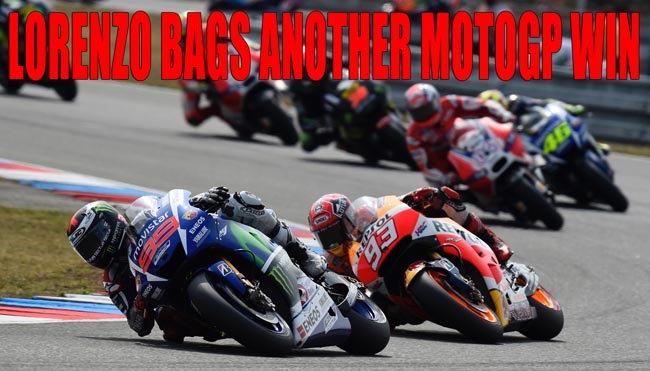 Spain’s Jorge Lorenzo leads the MotoGP World Championship for the first time since 2013, courtesy of victory at round 11 of the series at Brno, in the Czech Republic, at the weekend.

Although equal on points with Yamaha team-mate Valentino Rossi, leader since round one in Qatar, former champion Lorenzo is officially ahead due to a superior number of race wins.

“I had a little bit more pressure today because I knew inside of me that this was the occasion to win the race and recover some points with Valentino,” Lorenzo said. “Now with Vale we start another championship together, from zero like the first race, and we’ll see what happens.

“I had a disadvantage of 29-points [after round three], then little by little, we won four races in a row, and especially after these last two races I could recover so many points,” he added.

“But the difference this year is that Vale is reaching a level of unbelievably consistency that meant that, even winning five races, if I cannot stay on the podium it is going to be difficult to fight him.

“So from this moment until the last race in Valencia my goal is to keep always on the podium. To win when I can and finish second or third when it is not possible. Like this I think I can fight in Valencia for the championship, or who knows maybe even before.”

Double MotoGP title winner Lorenzo and seven time champion Rossi haven’t battled each other for the premier-class crown since 2009.

Asked to compare their current strengths, Lorenzo replied: “I think our riding is pretty similar. We are very smooth. We carry a lot of corner speed. We are very consistent with our lap times during the race. We don’t make so many mistakes.

“Maybe he brakes harder and uses a different kind of setting to brake harder and later, and because of that he has some advantage in a fight. But I carry more corner speed. If I feel better on the bike I can be very fast, but especially very consistent with my lap times.

“So it depends on the track and how we feel. This can make the difference in the next races.”

“It’s not only the points recovered with Vale today but also with Marc, who I believe was keeping one of the favourites of the championship,” Lorenzo said. “For sure after this race probably his possibilities reduce a little bit because it is one less race [for him to catch up]. But for sure he will push until the end at all the tracks so we have to pay attention to him.”

In a repeat of last Sunday’s Indianapolis round, the Brno race soon developed into a victory duel between Lorenzo and Marquez.

Marquez got the better of Lorenzo in America but the positions were reversed in Brno, where Lorenzo broke the Honda rider’s challenge well before the midway stage to claim the nine points he needed to reach Rossi.

Just as during his previous run of four successive victories, Lorenzo led every single race lap in the Czech Republic.

“All weekend I’ve felt with a very good base set-up of the bike, been riding very strong and we finished almost all the practice in first and for sure this gives you a little bit more motivation. And when I can take pole position, normally I make a good race,” Lorenzo said.

“So I expected to be a little bit faster and Marc was following for five-six laps. But then I could brake later, go faster in the corners and I think this was the key to the race because could I improve one tenth, while Marc probably started to spin a little bit more and drop a bit his pace. Then when I saw one-second I took a big breath and I could ride better with less mistakes and increase this advantage.”

“But also I expected Marc to risk a lot and try to stay with me until the end. Luckily for me at this track he couldn’t follow or keep the same pace like in Indy, so this was my luck for today. That I could keep the pace and my rivals not.”

Rossi, who has won three races this year, finished 10 seconds behind Lorenzo.

World championship standings after round 11: