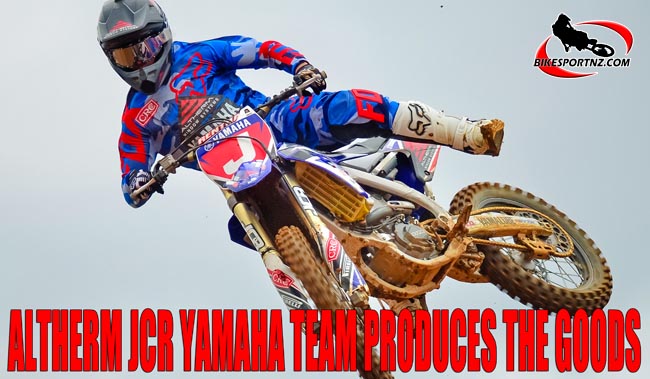 As manager of the Altherm JCR Yamaha Racing Team, the 38-year-old former world No.2 and former British, Australian and New Zealand motocross champion has plenty of reason to feel satisfied after learning this week that another of his riders has been selected to represent their country.

In was announced last month that Mangakino’s Kayne Lamont would ride for Team New Zealand at the upcoming Motocross of Nations in France, the annual “Olympic Games of motocross”, and now a second Altherm JCR Yamaha Racing Team rider, Australian Jay Wilson, has been chosen to represent his country at the same event at Ernee, the venue just inland from the D-Day landing beaches of World War Two.

“We had (Queenstown’s) Scott Columb from the Altherm JCR Yamaha Racing Team on the New Zealand squad to the Motocross of Nations last year and this time around we have two of our riders selected to go. I’m so proud,” said Coppins.

“I myself raced the Motocross of nations (MXoN) 15 times as a rider, on three of those occasions ending the weekend on the podium, and was team manager once (in Germany in 2013), so I know it is a really big deal.

“I’m working in an advisory role for Motorcycling New Zealand and I will be attending the MXoN in France in September.

“It’s quite a big thing for me to have two of my riders representing their countries at this event and a huge credit to my team. It leads in nicely to what we hope to achieve in New Zealand in the coming season.

“Jay wants to move to race in Europe in 2016, riding in the MX1 class, but we already have Kayne and (Otago’s) Courtney Duncan signed up to race for the Altherm JCR Yamaha Racing Team in New Zealand this coming season. We still have to announce an MX1 rider for the team and we are not sure yet whether Courtney will ride the 125cc class or the MX2 class, so there are still a few things to work out.”

Coppins said he hosted Australian Hunter Lawrence at his Motueka training facility just prior to the Junior World Motocross Championships in July and he went on to finish third outright in the 125cc class.

“While we can’t take all the credit for what Hunter achieved at that event in Spain, I do believe we have done some great things this season,” he said.