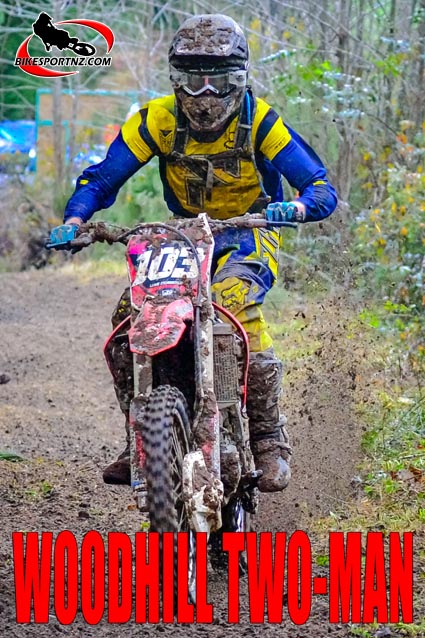 This weekend is shaping up to be a cracker in the Cross Country racing world with arguable the two biggest races in New Zealand on consecutive days.

On Saturday, the Tarawera 100 looms as another epic with the cross-country racers taking on the big guns from the motocross fraternity.

Then on the following day the battle weary will trek north to the sandy tracks of Woodhill forest for round one of the Endless Dirt Biking Woodhill Two Man race series.

Expect tactics to play a part for this opening race as one round can be dropped. So who will do both races to steal a march on the opposition?

One favourite on his home track is young Honda rider Luke Mobberley. For the last two years Mobberley (pictured here) has teamed up with fellow BikesportNZ.com rider Josh Jack in the pairs to dominate the series.

This year Mobberley is going it solo with the aim of taking out not only the Woodhill races but also the Paul Whibley-promoted NZXC cross country series. Round Three of the Woodhill Two Man also doubles up as a round of the NZXC.

The other big news is the involvement legendary Enduro ace Chris Birch. Chris has put his name to the 2 hour junior race (9.00am start) and is a firm believer in the development of our young cross country and enduro riders.

This year we are proud to be have Chris Birch Off Road Coaching sponsor the Junior class in our Woodhill 2 Man series with the overall winner of the Junior class receiving 1 free one on one session with Chris, 1 set Mitas tyres, and a $50 fuel voucher (parents should be happy with that) – a prize worth $600.

Each round we will send you some tips from Chris to get you on the right track for racing the series.

“For the first round I’ll start you off with some bike set up hints for sand.

“The softer the sand, the more you need the front end to be light. You may like to try lowering your forks in the clamps, this slackens the geometry slightly, lightens the front and stabilises the bike. You should also try running more compression dampening than normal. Rotating the bars slightly towards the rear will also help.

“For the rear suspension, check your sag heights, always important! (All the info is in the owner’s manual). I prefer to again firm up the compression dampening and I will normally add a few more clicks as the track gets rougher towards the end.

“Racing in the sand can put a lot of load on the engine, if you’re racing a two stroke or a non-fuel injected for stroke its worthwhile setting the carburettor slightly richer to help the engine out. This is especially important on smaller two stroke bikes, even more so when it’s cold.

Tyre choice –as we have a lot of variable conditions, a full on sand tire is not the best choice for the series. I would recommend a soft terrain tire like the Mitas C18 (my choice) or the Michelin S12 or Dunlop MX31.

Don’t forget to check out coaching dates available at www.chrisbirch.co.nz/calendar or email monica@chrisbirch.co.nz to discuss other dates or booking a one on one session.