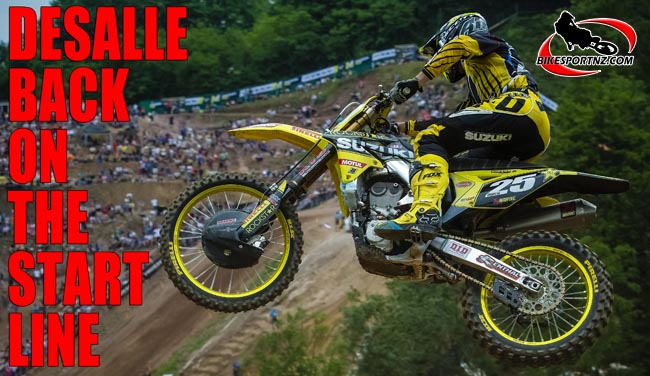 The Rockstar Energy Suzuki World MXGP team will be back to full operation for the 13th round of the 2015 FIM MXGP World Championship this weekend at Loket and the Grand Prix of Czech Republic, with Clement Desalle set to return from a three race absence due to a knee injury.

With the arrival back to the starting grid of Desalle and also news this week from the KTM factory that its Italian defending world champion Antonio Cairoli would be excusing himself from racing to rest and recover from injury, it seems likely there will be fresh challengers emerging for the championship leader, French Yamaha rider Romain Febvre.

Belgium’s Desalle hopes he will be just the man for that job.

The 26-year-old has been riding his RM-Z450 this week and will attempt the Loket hard-pack, where he has a phenomenal 100% podium record in his appearances since 2009 including three victories, in an effort to reignite his season after the disappointment of his crash at the French round in May.

Desalle is currenty sixth in the series standings, albeit 54 points behind Russian Honda star Evgeny Bobryshev.

The epic, swirling and fast hillside course at Loket restarts MXGP after a free weekend and the previous round in Latvia where Desalle’s young Dutch team-mate Glenn Coldenhoff gave the RM-Z450 its first overall win this season. With Coldenhoff in hot form and full of confidence, Desalle on the comeback trail and his other team-mate, fellow Belgian Kevin Strijbos, hunting a fourth podium finish from the last five rounds Suzuki will have potent presence in the premier class.

Strijbos and Coldenhoff finished first and second respectively and shared moto wins at Tensfeld for the latest outing in the ADAC MX Masters German Championship last weekend and in which Coldenhoff was able to extend his lead at the top of the standings.

The sand was a decent form of preparation for the three Grands Prix in the terrain that lie ahead for rounds 14, 15 and 16. Desalle has been trying to keep in shape after healing from his knee and right shoulder ailments and has not turned a wheel at MXGP since the Italian meeting at Maggiora in June.

“I have been training the best that I can and I have been improving step-by-step,” said Desalle, who withdrew from the 2014 Czech Grand Prix on Saturday due to a broken scaphoid. “It is not really 100% just yet but I can feel it getting better. I rode the bike on Tuesday and it was not perfect but was OK. I’ll do my best at Loket. I just want to find a good feeling on the bike and see what it possible.”

“I didn’t race at Loket last year because of my knee injury,” says Coldenhoff who took a sixth place in the first moto but DNFd the second while in MX2 in 2013. “In 2013 I did well and it was a shame my engine broke otherwise I could have been on the box.

“It is an old-school track with not as many jumps as some of the other Grand Prix tracks but it can be quite technical because of the off-cambered turns,” the Dutchman added. “Starts will be important because it is quite tight but I’m looking forward to having some fun at what is a beautiful place.”

Strijbos has plenty of experience at Loket and in fact gave the RM-Z450 its (and his) very first Grand Prix victory across the pebbly soil in 2005. On that day 10 years ago Strijbos made a decent launch from the gate and after several years with a new layout Loket is due to switch back to the old trajectory with the long start straight again located in the only flat section of the course.

“It is good that they have changed the track back to the old place; way better,” the Belgian said. “I’m looking forward to going there after a good weekend in Germany and I’ll do my best to get back on the GP podium.”

Rockstar Energy Suzuki Europe’s Jeremy Seewer completed a Suzuki sweep of the Tensfeld rostrum for what was round five of the German domestic competition. The Swiss went 3-4 on his works RM-Z250 against the bigger bikes. He is now excited about the trip to Loket; the gravelly terrain and hard-pack offering some of the 19 year old’s favoured conditions for racing.

Seewer is only seven points from the top three of the MX2 FIM World Championship standings and is hunting his fourth podium finish of the year.

“It’s a nice layout at Loket,” he said. “Uphills, downhills and a ‘sandpapery’ ground which is pretty slippery; the combination is kind of special but I like it and have always done quite well in the past.” Seewer claimed eighth overall with a first moto ride to sixth in 2014 that represented his second highest moto result of a debut campaign. In 2013 he was runner-up in both motos and overall as well for the sixth round of eight in the EMX250 European Championship.

The weather forecast for the weekend predicts bright and cloudy conditions with temperatures in the mid-twenties.