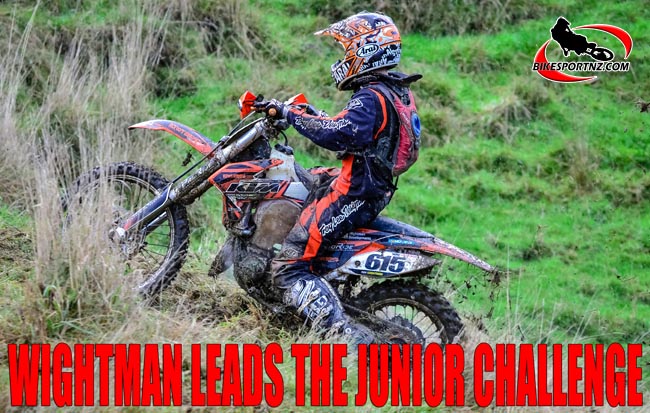 National junior cross-country champion Nick Wightman showed the sort of form that earned him that title when he again won the junior section of the weekend’s Woodhill Two-man Cross-country race.

The juniors were set off early in the day, with a two-hour mission ahead of them, while the seniors were to follow in the afternoon with their three-hour battle.

Although many of the entrants teamed up in two-rider combos, the 12-year-old Wightman chose to ride solo and he took his KTM85 to the head of the field early in the junior race.

When the chequered flag finally flew, the Waimauku rider was a lap ahead of his nearest challengers, the Waitoki pair of Patrick Lunt and Matt Vastre (riding a KTM125).

After two of four rounds and back-to-back wins to his credit, Wightman now leads series for solo junior honours, 13 points ahead of Warkworth Suzuki RM125 rider George Swift. Swift has a 6-2 score-line in the solo grade after the two rounds thus far.

A battle for honours in the two-rider teams section of the competition is developing between the Lunt/Vastre combo and the two Refoy brothers.

Lunt and Vastre have a six-point advantage over the Refoys at the top of the standings, with Auckland pair Tawny Floyd and Charlotte Russ four points further back in third position.