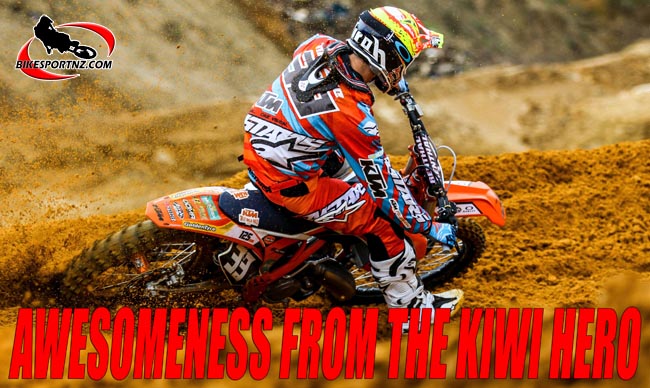 It was another breakthrough moment for New Zealand’s Josiah Natzke in Europe at the weekend.

The Waikato teenager, who raced his CMR Red Bull KTM machine to back-to-back senior national 125cc titles at the 2015 senior New Zealand Motocross Championships earlier this year, celebrated another career highlight after he won both his races at the fifth round of eight in this season’s European 125cc Motocross Championships (EMX125) in France at the weekend.

The 16-year-old from Hamilton, in his first fulltime foray into this hotbed of world motocross, remains third in the EMX125 championships standings, with just three rounds remaining, but his phenomenal result at the weekend means that he has clawed to within just 10 points of the current No.2 man, French Yamaha rider Maxime Renaux, and is now just 15 points behind the series leader, his own KTM Factory Junior Team-mate Jorge Prado, from Spain.

While Natzke scored an incredible 1-1 result at the famous French circuit at Villars sous Ecot, Renaux and Prado shared points behind him, Prado finishing 3-2 and Renaux posting a 2-3 score-card.

Natzke won the weekend and Prado was awarded runner-up spot courtesy of the count-back rule, officially making it a 1-2 result for the KTM Factory Junior Team.

“After five rounds I finally got it (a GP win outright), so I’m very happy,” said Natzke afterwards.

“I’m slowly chipping away at it and hopefully I’ll just keep my head down and keep working hard and try and live every day as it come and just see what happens.”

Natzke’s 14-year-old team-mate Prado was also thrilled with his weekend.

“Yes, I’m really happy. The track was really rough yesterday (in race one on Saturday) and I could not find my lines or my riding style, so I was really motivated to make a good race today and to ride like I usually do.”

“Of course it is really nice to the podiums of Josiah and Jorge. Josiah was by far the fastest guy of the weekend. He confirmed his form and also why I took him on board and what I expected him to do. He is just 15 points behind and there are three races to go so anything is possible.

“It’s going to be an exciting championship to watch. Jorge made a really smart race and didn’t lose any points in the championship. He did a great job of defending his second place, especially in the second moto.

The next round of the EMX125 Championship is set for Maggiora, in Italy, in a fortnight (on June 14), followed by Belgium (Lommel, August 2) and, finally, the championship wraps up in The Netherlands (at Assen, on August 30).

Natzke became the youngest ever rider to win a senior motocross title in New Zealand, at age 15, when he dominated the senior 125cc championships in 2014, before successfully defending his title, with support from the CMR Red Bull KTM team, in Pukekohe in March of this year, just a week before heading to Europe.