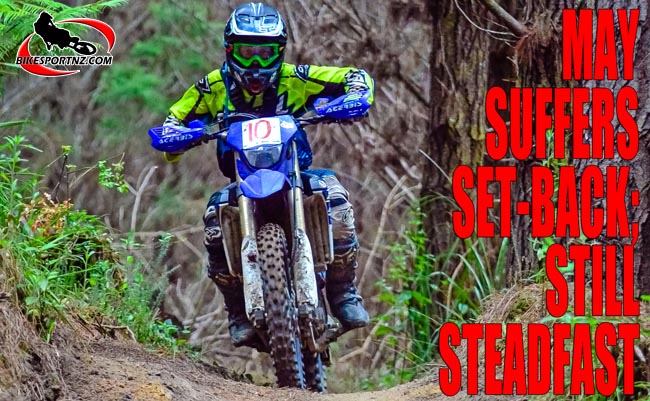 New Zealand’s Callan May is undeterred, despite his American cross-country motorcycle racing campaign suffering a minor set-back in Springville, Indiana, on Sunday.

Racing in the high-profile Grand National Cross-country Championships (GNCC), the 22-year-old Yamaha rider from Titirangi, in Auckland, in just his second season of GNCC racing, struggled to finish only 29th overall and 16th in his XC2 (250cc) class at the fifth round of 13 in the series at Springville.

Although it was the Yamaha rider’s second poor result this season – he was unlucky to finish 37th overall and 18th in the XC2 class, after mechanical problems, at the series opener in Florida in March – he remains on target to finish the 2015 series among the top 10.

“It was not the best day for me by any means,” said May, in classic understatement.

“It had rained hard on Friday and Saturday at the track, making it another muddy race. I am usually confident going into muddy races as a lot of our cross country and enduros events back home are muddy.

“This time my confidence did not help. I struggled from the beginning of the race. I was battling my bike and the hard pack slick and muddy track.

“A stupid mistake on the first lap getting stuck on a short rocky hill cost me big time, forcing me to get off my bike and push it up. Wasting energy and losing the pack, from then out, I was off the pace.

“The track was short with around a 20-minute lap time and this meant the track got tore up and really rough. Lappers where an issue from lap two also, not that these are any excuses for my race.

“I just was not feeling any flow on the day and it would definitely be a race I would like to forget about. From this poor result, I now know I have a lot of work to do in the next two weeks to redeem myself at round six.

“A new track on the circuit taking us to New York, so, with nobody having raced there yet, it will be exciting to see how the next race pans out. My dad is heading back over at the beginning of June, so, with his help I hope to get back on top of my game and get the results I’m working hard for.”

May (Yamaha YZ250F) has experienced a roller-coaster ride in the series so far this season – he has so far registered 18th, 9th, 9th, 7th and 16th placings in the XC2 class in the five rounds.

Unfortunately, his latest result sees him slip back from ninth to 10th in the championship standings.

Russell now sits third on the all-time bike wins list in GNCC racing after his 27th career win at the weekend, surpassing Ed Lojak who claimed 26 wins through his impressive career.

The 2015 AMSOIL Grand National Cross Country Series resumes May 9 and 10 with the Dunlop Tomahawk GNCC in Odessa, New York.