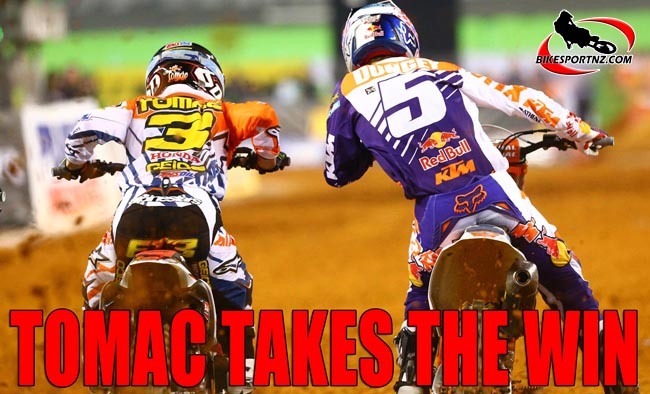 Colorado’s Eli Tomac captured his second United States Supercross Championship race of the season at Ford Field in Detroit at the weekend, although Florida’s Ryan Dungey still managed to extend his championship lead by finishing the night runner-up at this 12th round of 18 in the series.

And, racing in from of more than 46,000 fans, fellow Honda rider Justin Bogle raced to his first Eastern Regional 250SX Class win of the season, leading all 15 laps of the 250 main event.

KTM’s Andrew Short started the 450SX class main event by grabbing the holeshot, while Kawasaki’s Davi Millsaps and KTM’s Ryan Dungey fought for the No.2 position. On the opening lap, Dungey would move into the lead before being challenged by Tomac.

On the opening lap, Tomac moved into second place and set his sights on Dungey. Honda’s Cole Seely made his way around Millsaps on lap three to take over third place.

Tomac took over the lead on lap four and by lap 12 established a 6.6 second lead. Tomac won by a margin of 11.89 seconds over Dungey, who finished second, and Seely, who finished third. Dungey now has 11 podium finishes on the season and Seely has three.

“I have had so many up-and-down races this year, but I was able to put it together tonight,” said Tomac.

Honda’s Trey Canard, who is second in season standings, suffered a crash in qualifying and did not race in the main event. Dungey now has a 67-point lead over Canard.

Bogle jumped out to the early lead with holeshot and Kawasaki’s Joey Savatgy pulled up on his rear wheel. Yamaha’s Anthony Rodriguez settled into the No.3 position.

On lap three, French KTM rider and former MX2 world champion Marvin Musquin, who came into the night’s race with four wins, rebounded from a bad start to take over the No.3 spot from Rodriguez. Musquin made a move around Savatgy for second place on lap seven, but Savatgy answered back. Eventually Musquin took over the position and began to pull away.

“The bike is a rocket ship, and it got me off to a great start,” said Bogle. “We have to take every weekend with the same approach. It’s going to be tough with two races left on the Eastern Regional 250SX Class schedule, but I am going to keep my head down.”

“Once again, the start was key, and I didn’t get the start I needed,” said Musquin. “Second place isn’t bad and I have the points lead still.”

Both Musquin and Bogle have been on the podium at every race this season. With the win, Bogle cut into Musquin’s points lead and now trails by 13 points.