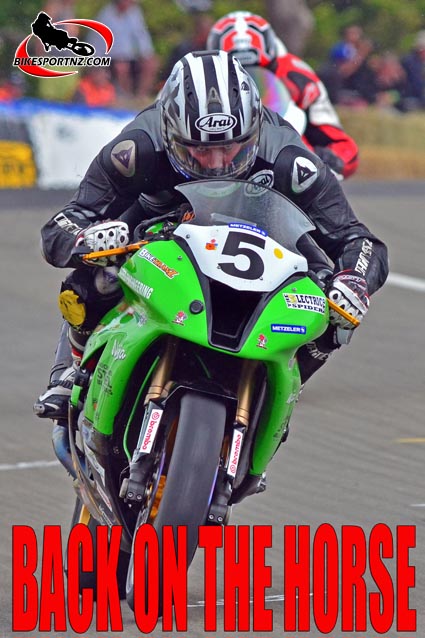 He’s been on compassionate leave, but now Waikato’s Nick Cole is ready to collect his weapon, head back to the trenches and begin fighting again, starting this weekend.

The 28-year-old Hamilton fitter and turner has been notably absent from the sport of superbike racing for nearly a year … and with good reason.

The Kawasaki rider had been on top of the New Zealand superbike scene at the start of 2014, having just completed a successful Suzuki Tri-Series campaign, culminating with him scoring a hat-trick of wins at the famous Cemetery Circuit on the streets of Wanganui on Boxing Day 2013, his streak of wins that day also giving him the main prize for the series, the Formula One crown.

He previously tasted national championship success when he won the 600cc sports production title in 2010 and, since his switch soon afterwards to the bigger 1000cc ZX10-R Kawasaki superbike, he had consistently figured among the top five in this premier class.

Cole had been primed and ready to tackle the 2014 superbike nationals and, as the series progressed through the early months of the year, he proved himself one of the men to beat, putting himself just a few points behind the series leader and in a good position to win the premier crown at the fourth and final double-header round at Manfeild in March.

But then it was learned that Cole was in hospital with a broken jaw and would be a no-show at Manfeild – he had been clattered across the back of the head by a thug with a bar stool in an unprovoked pub-bar assault in Taupo the preceding weekend, nothing to do with anyone in the motor-biking community – and it meant the dream of superbike glory had evaporated for Cole.

Understandably, the father-of-three was in no mood to race motorcycles for quite a while after that.

But the time off has been good for Cole and now he’s ready to head back to the race track.

While he was consigned to the spectators ranks, his 2012-model Red Devil Racing Kawasaki ZX10-R has still been burning rubber, Austrian visitor Horst Saiger taking Cole’s bike to win the 2014 Suzuki Tri-Series in emphatic fashion.

“Horst’s performance on my bike before Christmas gave me all the inspiration I needed,” said Cole.

“My wife Rachel, Kawasaki New Zealand and all my sponsors have been very supportive and keen to see me come back.

“I’ve been racing BMX, motocross and then road-racing at national level since I was six years old and I think I’d possibly just lost the desire. Having a break from the sport has been good because I feel refreshed.”

Although he will join the New Zealand Superbike Championships with the series already halfway through and therefore with no chance to win a title – his first race back being the third round of four at Hampton Downs this weekend – Cole has his focus on an international event next month.

He will use his races at Hampton Downs, and at the final round of the nationals at Taupo a week later, to sharpen himself for the Barry Sheene Festival of Speed meeting at Eastern Creek, near Sydney, in Australia on March 21-22.

“I’ve been sitting at home watching the nationals on live streaming and that’s has been hard to do. I want to be a part of it again.

“When I walked away from the sport, it was because my heart wasn’t in it anymore and you really have to be 100 percent committed to race a superbike or you’re going to get hurt. I feel rejuvenated now and I’m ready to go hard again.”