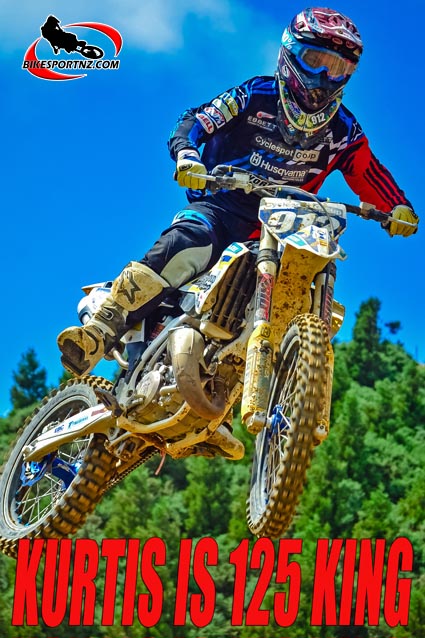 Auckland’s Kurtis Lilly is on top of the world at the moment … well top of the mountain anyway.

The Husqvarna rider from Pukekohe won the senior 125cc class at Sunday’s annual King of the Mountain motocross in Taranaki, the event an integral part of his build-up for the upcoming four-round New Zealand Motocross Championships, round one of which will be staged at the same venue on the outskirts of New Plymouth next month.

Lilly had a fight on his hands, however, with fellow BikesportNZ.com-supported rider Ben Broad, of Ngatea, and fellow Aucklander Sean O’Connor, but improved as the day went on and the track became progressively rougher and less forgiving.

He took his Husqvarna TC125 to finish third in the opening race of the day, close behind Broad and O’Connor, but then stepped it up a notch for the two races that followed, winning them both and securing the class overall by just one point from Broad.

“I have not raced at this track in about two years,” said Lilly, a 20-year-old builder. “But I loved the layout and really enjoyed my day. The competition was awesome and the result a great confidence-booster for me.

“All my training seems to be falling into place now and I’m sure I can give my competition a run for their money at the nationals (which kick off at the same Barrett Road circuit, on the outskirts of New Plymouth, on February 8).

It was almost double glory for the Husqvarna contingent with Atiamuri’s Hadleigh Knight riding his Husqvarna TC250 to finish a close runner-up to Rotorua’s Mike Phillips in the MX2 (250cc) class.

Phillips won the first MX2 race of the day, while Knight had to settle for fourth, but then Phillips twice finished runner-up to a storming Knight.

Phillips beat Knight for the crown by just one point.