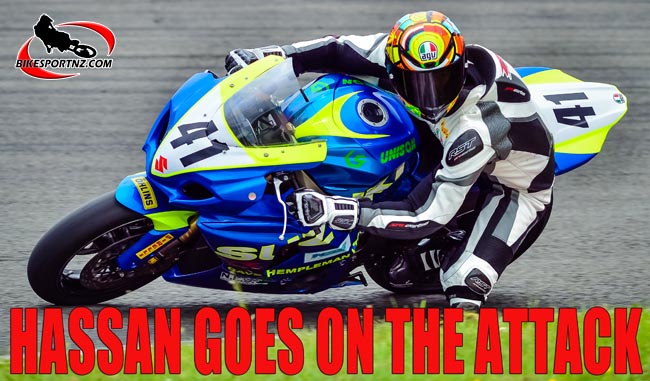 Defending champion Dennis Charlett came under attack at the second of four rounds of the New Zealand Superbike Championship at Timaru at the weekend.

The 46-year-old Christchurch man enjoyed a fantastic opening round at Ruapuna, on the outskirts of Christchurch just over a week ago, but it was a different story for the Suzuki ace at Timaru’s Levels Raceway at the weekend as fellow Suzuki rider Jaden Hassan mounted an attack.

Aucklander Hassan qualified his Suzuki GSX-R1000 fastest at the Levels circuit and then proceeded to score an impressive hat-trick of race wins, elevating him from third – and a distant 40 points behind Charlett – after the series opener to now be in second spot and just seven points adrift of last season’s champion.

In contrast, Charlett finished 3-3-5 in his three outings at Levels.

Hassan, from Westmere and aged just 20, had been expected to be one of the superbike class frontrunners this season after his scintillating performances in the pre-season Suzuki Series, but nobody expected such a rapid resurrection after his disappointing start to the nationals.

“I’m pretty stoked with how things have turned out now,” said Hassan afterwards.

“I was pretty disappointed after last weekend, so to come out on top this weekend is a great feeling.

“It was pretty hot here today, 38 degrees I think, and (Christchurch’s) James Smith made it hot for me on the track in the last race too. I’m just glad to come away with such a good result.

“I’ll have a couple of weekends off now and then do some testing to get set for the next round at Hampton Downs. We have a six-week break now, before wrapping it up with two rounds back-to-back.

Meanwhile, in the 600cc Supersport class, Christchurch brothers James and Alastair Hoogenboezem continue to lead the way on their identical Suzuki GSX-R600 bikes, although now in a different order.

James led the class after the opening round but Alastair came on strong at Levels, taking pole position in qualifying and then scoring a lap record on his way to winning all three races at Levels.

James crashed in one of his races but still managed to recover and finish 13th in that race, thus salvaging something from the disaster and, although he’s slipped off the lead, he is still in second position and just 16 points behind his brother.

Round three of the series is set for Hampton Downs, near Meremere, on March 7-8, with the fourth and final round set for Taupo on March 14-15.